RussBarb was the second character to reach level 99 in Diablo II Classic (D2C), and the loser in an epic race against GerBarb. GerBarb was the first to 96 and 97. RussBarb passed him and was the first to 98, before GerBarb rallied and won the race to 99. Each character was played by a large team of gamers, since only with cooperation and teamwork was it possible to make the thousands and thousands of Diablo kills, in 8 player games, required to level up that high.

This page archives an article and some news posts made about the race back in late 2000, on Diabloii.net. The links to screenshots and other evidence are long since dead, unfortunately. The final update includes an interview with the RussBarb team. 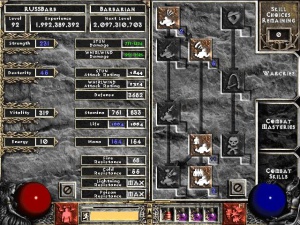 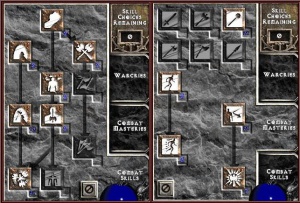 RUSSBarb is a team-played and assisted Barbarian on the European Realm. He was the first character to reach Clvl 92, the first to discover the experience roll over bug, and the first to Clvl 95 and 98, and was just behind GerBarb in reaching Clvl 99.

View the screenshots to see his stats and skill trees.

RUSSBarb uses a rare Martel de Fer, with 20 points in Hammer Mastery and 20 in Whirlwind as his main skills. He has good equipment, but not as good as you might expect given the Character Level. With so much time spent playing quickly to kill things, there isn't much for gambling or hunting up good equipment or trading.

A report from the ladder leaders:

Russian Character RUSSBarb - Now World's #1. Currently, new leader in all ladder ratings is a barbarian named RUSSBarb, which was developed by the team of the very best russian Battle.Net players in under one month, on European realm.

This unbelievable experience gathering speed was achieved by organized team play, which was used for all of the higher levels of RUSSBarb. Characters, even at level 80, are having a very hard time developing if they are run by a single player, so before the strategy was to develop the character by "soloing" in a game with 8 players, gathering maximum experience. However, after about level 90, even this method starts to fail, considering huge experience cuts. Common hell/hell monsters at River of Flame give minimal experience gain, and each level up requires quite a lot of it. The only monster which still gives significant experience at this level is no one but the hell's Diablo himself.

According to this, we created and successfully used character development strategy. It is fairly simple, yet highly effective. In short, the procedure is as follows: first, few high level characters cleanse the Chaos Sanctuary and weaken Diablo to some very low percentage of life (using few sorceress characters with high-level Static Field helps avoid the risk of killing the boss), after that our hero enters the game and kills Diablo with minimal risk, with 7 more players in that game. It is very effective since he wastes close to no time on opening the Sanctuary seals.

Sure, this strategy requires quite a lot of effort and organization from the support team. All of them should have a high level character, and they should be very well coordinated. Due to this need of huge support team our hero is being developed mostly at night, and this slows his progress down, yet it still is far beyond what single heroes can achieve.

During his relatively short ladder life, our character with his incredible ascension speed managed to attract attention of most top ladder characters; but it was, unfortunately, too late for them to do something. Even now, no top player can come close to the speed of RUSSBarb. However, some groups utilizing similar strategy are being created, but in any case - RUSSBarb is current number one in world's standard ladder, and his opponents must show lots of dedication and organized effort to come close or beat his position.

At the present time, the only serious contender is the Asia's leader, who reached CLvl 92 already. He, however, has been very slow in the last few days (also caused by his recent death), which further lowers his chances to come close to RUSSBarb's position. So, we gained some more precious time for RUSSBarb's advancement to become the first character to ever reach Clvl 99.

We thought that by sharing this information, we can create a healthy competition with new, team-based approach, in this race for the crown of the world's top character. We have nothing to hide; it is a game after all.

RUSSBarb was the first to break the bank. Here's what they had to say about it:

This bug is caused by the fact that ladders use "signed int" for intermidiate experience storage. That way, character's experience (stored in unsigned int on client side) is overflowing signed int (which has a maximum of 2,147,483,648), and ladder display becomes garbled.

This is definitely not a Battle.Net hack or exploit on our side; the character did not get any additional experience because of that bug, and we hope Blizzard would be able to fix the ladder before other top characters would break the 2,147 Million barrier.

Diabloii.net: It was not been fixed until mid-December 2000, but was repaired before either team reached level 96.

[Diabloii.net: Note how huge the lead still is, with GERBarb nowhere in sight, yet they were virtually tied two weeks later at lvl 95.]

GERBarb has stormed up from behind to take the lead, and be the first to level 97. Can RUSSBarb catch up and will either of them persevere all the way to level 99? Both teams plan to, but it's a long way there, even with their tactics.

Here is an interview we conducted with the RUSSBarb Team. The Questions were sent off in early December, when both RUSS and GERBarb were around lvl 96. They both levelled very quickly after that, and after RUSSBarb passed GERBarb and was the first to lvl 98, GERBarb really put on a burst of speed, and won the race to Clvl 99.

The answers came back from the RUSSBarb guys in late December, after the race was over, so some of the Questions and Answers don't exactly match, due to the time lag from Q to A.

Q: There are rumors and accusations of cheating now, of Russians trying to PK GERBarb or his helpers, and the same thing with Germans against RUSSBarb.

Well we of course can’t deny, that there were some attempts to kill GERBarb, but these attempts weren’t approved by RUSSBarb team. At last it was reaction of some Russian payers against German abusers.

Q: Has this sort of thing been a real problem, with people coming into games and trying to interfere with the exp gain? And is it an organized thing, or just some people seeing who is in the games and then wanting to try and cause problems just to make a name for themselves, or just because they can?

It wasn’t organazied thing at all. Everybody wanted to help RUSSBarb as he could. Someone cleaned Sancutary, someone was searching ES and some people wanted to interfere GERBarb. If it is allowed by the game, then there wasn’t any cheating. Both sides (R and G) wanted to win, and used all ways to do it.

Q: And would you consider a duel with GERBarb if you were both say lvl 98, and whoever won would have many hours advantage in level'ing up, from the exp loss for the other?

Q: Has your equipment changed much or any from the stuff on your site from lvl 92?

No. All our stuff is the same, because it was tested in many battles and we consider it to be the most suitable for RUSSBarb.

Q: Is it still fun? Or bored of the endless Diablo kills and just going on to try and get to 99?

No. We aren’t bored with that. We are upset, that we could first become lvl 99. But RUSSBarb cannot be forgotten because it was the first team-character in the world, and the first character to take lvls up to 94, and then 98.

Q: Do you think you'll make it to 99, or will you get too bored, or if GerBarb or someone else gets there first will you give up?

Of course we thought, that we would make 99 first ;) Is there any sense to start the challenge if you’re not sure in your winning? J I don’t think that we will give up (even now, when GerBrab is lvl 99), we’ve spent too much of our time, nerves and money (for Internet providers), so we can’t give our Barb up.

Thanks to Demiurg and the rest of the RUSSBarb team for their answers, and congrats on running such a fierce race.