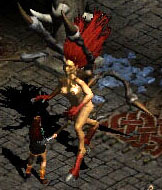 Andariel is a poison-based creature, capable of spewing toxic green clouds as well as striking with her scorpion tail-like stingers. She has good foot speed and attacks relentlessly, but is vulnerable to fire and can't hurt characters with high poison resistance. Use poison resistance equipment and antidote potions when fighting Andariel, and use the terrain as well; the blood lake in the atrium outside her throne room can be an effective obstacle, and many a player has survived this encounter by running round and round it, giving their healing potions time to work against Andariel's deadly poison. She is not a very popular monster to run for items, since she doesn't drop that appealingly, and isn't especially close to any waypoints. When killed, she erupts into a geyser of flame, and causes a small earthquake.

Die, maggot.
Fear me!
The East is beyond your grasp.