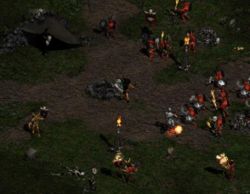 Bishibosh (left) and company
Past Flavie lies the Cold Plains as well as the Cold Plains waypoint. This is one of few waypoints that do not have a randomly set location. The Cold Plains is where you start seeing those corrupted rogues that Akara first mentioned. Former sisters of the Sightless Eye fallen under the dark spell of Andariel. If you spoke to Kashya after speaking to Akara upon completing the Den of Evil quest, she will notify you of disturbing activity in the monastery graveyard: Their fallen sisters being resurrected as undead by Blood Raven, a former rogue captain. From here you have a choice to proceed through the Cold Plains toward the Burial Grounds or approach the Stony Field.

In the Cold Plains, you will also find Bishibosh, another superunique, who commands a pack of Fallen and Fallen Shaman making camp complete with a shelter and flag. Bishibosh has the ability to not only summon other Fallen within the area but also other Fallen Shamen. This "carver camp" with Bishibosh isn't hard to find for not only his unique gold/yellow-colored skin, but it is usually the biggest pack of monsters in the area.