Crafted items are interesting and potentially very useful, but many players are unfamiliar with them, and even experienced players often have questions about exactly how they work or why they should be used. Check the other pages in this section for full info about Crafted Items, and all known recipes. This page has the most often asked questions about Crafted Items and Crafting.

Some of the questions in the FAQ are found on the other pages in this section, and the most common ones about making recipes are on the tops of every recipes page.

Can you craft Ethereal items?[edit]

Yes, if they are magical. They become normal items; they do not remain Ethereal.

They're rather high, that's what. The Clvl req is determined by taking the Clvl req of the highest random modifier, and adding to that for each other mod on the item. You can get Clvl reqs over 100 in some cases, making the item useless.

Are there any good crafting recipes in v1.09?[edit]

Yes, though most players are ignorant of them. Lots of players like Hit Power gloves, which come with knockback, for their Bowazons. Hit Power gloves require an Ort, perfect Sapphire, and any jewel, as well as magical Chain Gloves or Heavy Bracers or Vambraces. You can buy or gamble chain gloves easily, so the number of these you make is limited only by how many Orts and Sapphires you find or trade for.

Blood rings/amulets get life leech and hps, and this can stack, so you could get a ring with 12% life leech, 60 hps, big resistance, MF, etc. Blood amulets can be up to 4% life leech, and you can get mana leech randomly; I've made 4 or 5 nice dual leech amulets with this recipe myself. Picture your +2 skills, 4/8% dual leech, 20% prismatic, 25% MF, 10% faster run amulet? Both blood jewelry recipes require a perfect ruby, any jewel, and Amn (amulet) or Sol (ring). Since you're probably just throwing away those runes and rubies now, this costs you nothing to do, and might pay off big time.

Caster amulets have mana regeneration and bonuses to mana, and caster rings have mana regen, bonuses to mana, and even fast cast. A good caster ring/amulet would beat just about anything in the game for your Sorceress and/or Necromancer. Caster rings and amulets are even easier to make than Blood jewelry, since both require a perfect Amythest, and Ral (amulet) or Amn (ring). Blood amulets are useful to a lot more characters than caster rings, so you'll probably want to save your Amns for that, but Rals are very easy to obtain (you get 1 and a Tal for doing the rescue barb quest in Act 5 that hardly anyone does), since they're just #8, and you can cube 3 Tal's into one as well. If you start saving your runes for them, you'll find that Rals accumulate more quickly than perfect Amythests.

Most players don't save Ral, Amn, or Sol, or perfect gems, or if they do save them they don't value them very highly. This means you can probably trade for these items quite cheaply.

My crafting never gets anything good, should I keep trying?[edit]

The attitude to take on crafting is to look at it like a gamble, but one that's guaranteed to be rare. You probably won't get anything good, but if you do enough you'll score a keeper. If the ingredients aren't hard to get, especially if they are something you'd throw away otherwise, why not try it? 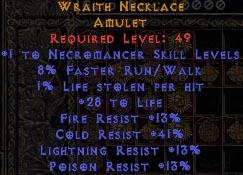 Skills and frw, better then some rare amulets I gambled.

Also, you might get something good you weren't even trying for. Look at the Blood Amulet here. I have no need for life leech on a Necromancer, but the faster run and +life is useful, and the random mods, +1 necro, big resistance, and bonus +hps, make it a very nice item. You could gamble all day, spend 5m gold, and never get a rare amulet half this good for your Necro. You'd certainly never get one with faster run on it. Of course these random mods on a Caster Amulet would be just exquisite, which is why you should be trying those also.

What is a "Craftable Item"?[edit]

For most recipes, a "craftable item" is a magical item only. Prior to v1.09 you could use most any type of non-normal item, but the recipes now are a lot more picky.

All Crafted Items have several pre-set mods (usually three) that will occur every single time that particular recipe is created. These mods almost always have some flexibility in them, like +10-20 vitality. So that recipe will always turn out an item with from +10 to +20 Vitality, randomly-determined.

You'll often want to craft a recipe several times to get high values on the pre-set mods, and hopefully some good random mods as well.

How are the random mods generated?[edit]

It's complicated. Basically you want to use the highest level items you have in the recipe, and have your highest level character actually create it.

The game actually takes into account the Clvl of the character doing the crafting, and the qlvl (Quality Level) of the item, which is determined by which monster dropped the item, or which level character spawned the item if it was bought from an NPC or gambled. See the Item Generation Tutorial for more details on Ilvl and everything else.

If you are looking to craft something, save one you find from a very high level monster on hell, and use your highest level character.

If you are using v1.09, and it's a Caster, Blood, HitPower, or Safety item we have listed on our updated pages, you are probably doing something wrong. Be sure you have the correct type of item, runes, jewel, gems, etc, and nothing else in the cube. These should all work on and offline.

If you are using v1.08, virtually every one of these recipes has changed ingredients, so you'll need to find a listing of the old v1.08 stats, or upgrade your D2 version. Most of the recipes never worked off-realm prior to v1.09 anyway.

Do the mods on the item used in the recipe persist?[edit]

This includes random spell mods, such as bonuses to skills on wands, staves, scepters, as well as all the class-specific stuff. All of these will be re-rolled, so you might get better bonus skills or worse, or none at all.

This also includes erasing any sockets in the item, and removing any socketed gem/rune/jewel properties. The item is all new, just the base item type is preserved, so whatever you use in the recipe is going to be totally gone.

Can I Imbue a Crafted Item?[edit]

Prior to v1.09 it was possible, (and this was the only way to imbue Circlets) but this has been fixed in v1.09 and it's no longer possible.

What makes Crafted Items special and different than Rare items?[edit]

Most Crafted Items have pre-set mods that are seen on some Set and Unique items, but can never be found on magical or Rare items. Things like Crushing Blow, bonuses based on your total mana, Fire Absorb, and more. In addition there are potential bonuses that can be found on magical/Rare items, just not that type of item. For example, leech on boots or belts, bonuses to skills on gloves or rings, and many more.

Not any more. Crafted Items are treated as Rares by the game, in terms of modifiers possible on them, so you can't get Cruel or Grandmaster's or Weird or Godly or Chromatic or any of the other mods that you can't get on Rares. In the beta, magical-only mods could occur, and players got some Crafted items with unbelievable stats, but this has been fixed in the final game.

Can I socket a Crafted Item?[edit]

Yes, but you will always get just one Socket, same as socketing a Set, Unique, or Rare item. In the beta more than one socket was possible, but this is fixed in v1.08.

Can I make a Crafted Item with a socketed item?[edit]

Yes, but only for item types that can have sockets (helms, non-throwing weapons, shields, and body armor). There are two methods of making crafted items with sockets:

Does the quality of the jewel or gem in the recipe matter?[edit]

In the beta, Crafting didn't require perfect gems, so this was a popular question. Gem quality didn't matter then, and since the gems must be perfect now, it's a non-issue. The mods on the Jewel required in many recipes don't matter either.

Do the random mods stack with the pre-set mods?[edit]

Yes, you could craft a Blood weapon, get 4% life leech from the pre-set, and get another 9% from a random mod, giving you a total of 13%, more than any magical or Rare item could ever get otherwise. In fact stacking like mods is the whole point in many recipes, such as the Blood Weapon #1, where the recipe will always have 35-60% enhanced damage, and you hope to get something from the Kings or Merciless (or both) families in addition to that.

Again, you will often want to run the same recipe several times to get a good roll of pre-set and random mods. It's much like Imbuing, you can get a great item the first try, but it's very uncommon, and you'll usually need several tries to get lucky.

Why are there two versions of most recipes?[edit]

There were normal and elite versions of most recipes in v1.08, but these are gone in v1.09, and the normal/excep/elite version of that type of item will work in the recipe.

There is a minimum Clvl req based on the pre-set mods, but if the Clvl of the Excep or Elite item, or any of the random affixes, is higher the highest Clvl req will always take precedence. They are generally a lot higher than a comparable Rare would be.

Will I lose items if I do a bad recipe?[edit]