The Den of Evil is a quest area that is only available before the Den of Evil quest has been completed. It's full of low level monsters, which are easy to kill even at first level. 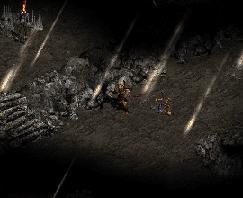 Den of Evil cleared
Inside the Den of Evil are many monsters that must be slayed in order to complete Akara's opening quest. Here await more Zombies and Fallen as previously seen in the Blood Moor, but this time Gargantuan Beasts and the Fallen Shaman are thrown into the mix. The Shaman can resurrect dead fallen and can usually occur without the player noticing until presumably clearing out the rest of the area. The Den of Evil also provides the first encounter of a superunique named Corpsefire.

The quest log will mention how many monsters still remain when the count reaches five. When cleared, the den will be penetrated by numerous rays of light from the cave ceiling, and the level will be known as "The Cave" from then on (not to be confused with The Cave found in the Cold Plains).