Faster Run/Walk items will make your character move faster both when Running and Walking. How fast your character actually moves is affected by several factors.

All characters in Diablo II move at the same speed in basic gear, but they differ as they gain bonuses from equipment and skills. Numerous skills increase run/walk speed.

Run/walk speed is always boosted by added FRW gear, and and each amount of increase is discernible, though perhaps not to the naked eye. (See breakpoints for various actions here.)

Movement speed in Diablo II is measured in yards per second (yards/s). A yard is 48 pixels in horizontal direction and 24 pixels in vertical direction.

There is no lower limit to charge speed. Thus, with enough slow it is possible to charge backwards. 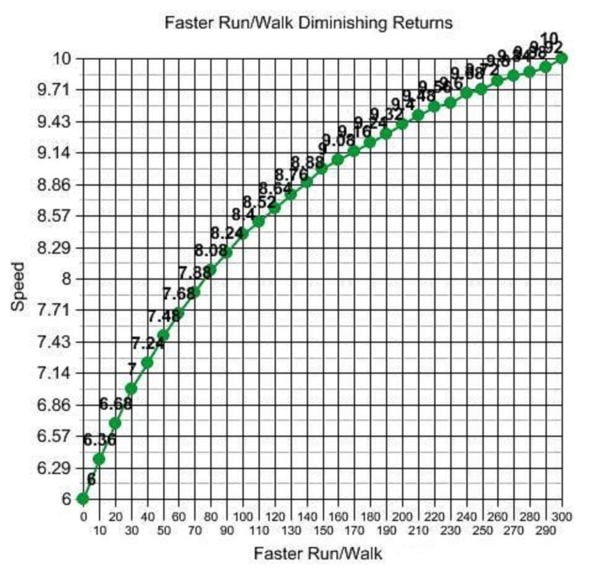 For example, level 7 Vigor gives 32 % FRW, which translates into +1.28 yards/s with run/walk and +2.88 yards/s with Charge. FRW from different skills stacks.

Speed Reduction from Armors and Shields

Thus, the maximum run/walk speed reduction from the armor and the shield is 0.80 yards/s (both heavy). The maximum reduction to charging speed is 1.80 yards/s.

Slow Target item. Regardless of X%, this ability functions as -100% on the Diablo 2 client. The ability functions normally as -X% FRW on the Diablo 2 server. If used, the ability causes severe desync, because the target is typically moving at different speeds on the client and the server. Slow from different items stacks (i.e. each slow item adds -100% FRW on the client side), and slowing effects of different type stack in general.

where BaseRunSpeed is 6 yards/s for all characters and other terms as above. Substituting EffectiveWalkSpeed into this formula, we get:

where the terms are as above. By substituting BaseRunSpeed and multiplying it by 150%, we get:

There is no lower limit to ChargeSpeed. It can be even negative.