Were you looking for The Forgotten Tower quest?

The Forgotten Tower is a crypt-type level in Act I found in the Black Marsh. It has five levels, and in on the fifth level The Countess is found. 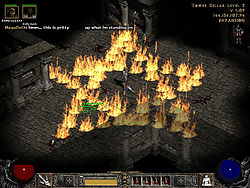 The fiery pentagram of the Forgotten Tower Cellar.

There are five levels to this dungeon, the first four with one unique or group of champions each. The last level contains The Countess. Beat her to complete the Forgotten Tower quest.

The Tower is very hard and very long, but you'll find tons of gold and equipment, and it's a great chance to level up and gain experience!

The Countess is fire enchanted which gives her fire damage and a 75 percent resistance to fire attacks, so you might want to wear some equipment giving you some resistances to fire, or it might be a tough fight!

Here are pictures from the Tower Cellar: