This guide will help you create and play a Singing Barbarian - A Barbarian character who exclusively uses the Warcries tree to fight and kill opponents.

The Master of Kiai

TO be a master of kiai, is to be able to project spirit force outside of your body in a burst of power. The natural vessel for kiai energy is the voice, and with a practiced shout adepts are reputed to be able to knock their enemies into a stupor, break down walls, work themselves up into frenzy and even face down demons.

A Barbarian actually using the Warcry skill tree as something more than a distraction or a pump!? I hear you cry, and you’d be justified in being surprised. At least since I’ve been playing the game, a large number of problems with the Warcries have rendered them useless as anything more than just a diversion. For one thing the most important one for our purposes – “Warcry” has rather low damage – 150-160 at level 20 truth be told. Further than that, it costs 29 mana, and for a class that only gets 1 mana per level, plus one for each point of energy added, this can be a serious problem.

But then came patch 1.10, our blessed holy grail and with it – the “synergies” – the main change which makes this build viable. A synergy is a way of getting an extra damage bonus on one skill if we spend skill points in other skills which agree with that one (they come up in the skill window as “x receives bonuses from y”.) Now, using these synergies, our damaging “Warcry-tree skill” - the one called “Warcry” (stay with me) gets an extra 6% bonus added to it with each point put into “Howl” “Taunt” and “Battle Cry”. With these skills at slevel (skill level) 20 as well, Warcry suddenly gets an extra 360% damage and ends up at 690-736 damage – a workable amount when we consider that we haven’t yet added our item bonuses.

Item bonuses! That’s our other magic word in this build. Barbarians can get bonuses to their Warcry tree from even regular magic items remarkably easily – barbarian helms, amulets, each of your duel weapons, all of these can have an extra +3 to Warcry skills. And remember, if you put points into the whole tree, that means the synergy bonuses get even higher! (so taking an average of +2 from each of the above items making +8 to skill points) puts our level 20 maxed-out-synergy bonus to 1328-1389 per cast. – Hopefully viable when we consider how fast we can shout.

So what skills does the Kiai master need?

Warcry is obviously our damage source, which also stuns opponents so that they can’t move for quite a long time – 6.4 seconds at slevel 28. This means that pretty much no regular melee attackers are going to be able to hurt you - another big bonus. However there is one big weakness to this skill. Its’ range is capped at level 1 to quite a small radius around you; meaning that you’re only really going to be able to attack monsters who are inside the melee distance. This means you do have to watch out for ranged creatures, un-stunable creatures, LE creatures (creatures which fire out lightning when they get hit) and creatures with auras. Some of these weaknesses can be partially/mostly dealt with, while others you have to keep guarding against, which you’ll see as we go through the other skills.

There is one other thing to mention with this skill. A weird quirk here is that quite often; the closer creatures are to you; the more they’ll be damaged by the skill. Sometimes they’ll even they get hit twice, for double damage with one skill use if they are adjacent to your position.

Howl has a huge range and scares monsters away. It’s especially great if you are being mobbed by un-stunable creatures, or if you want some alone-time with a unique (since they aren’t affected by any of our skills except Battle Cry, but their minions are. Alternatively if you just want to cross a packed screen without being bothered this is a useful skill, although it works less and less as time goes on, and by Hell it mostly won’t work at all.

Taunt is often more useful than Howl, because in an ideal situation you can eliminate the threat of ranged creatures with this skill. As soon as you Taunt monsters they have to come towards you if they can: (If they can’t they’ll just try to move towards you, fail and shoot you from where they are.) Another use for Taunt is to lure some creatures from outside the screen towards you, since the skill doesn’t need to be directly targeted. It targets the nearest of any nearby creatures. The trouble with this targeting system is that it can be quite hard to aim, especially if you’re under pressure from a whole aura enhanced ranged unit. It might be best to try and use Howl first, to relieve the pressure and then Taunt monsters in a few at a time, although this doesn’t always work.

The main thing to remember here is that strangely, the monsters which are in melee distance of you are usually no threat at all, while those outside this distance are a definite threat until they are lured in. So cast Warcry once and then, while the nearby creatures are stunned, it’s time for some Taunting.

Battle Cry is the last synergy-skill for this build, and probably second only to War Cry in usefulness. It has a very small range, but basically it will make any creature which can attack you much weaker (their damage will be halved at higher slevels) and also lower their defence (removing defence at higher slevels). As you can imagine, this spell is great for un-stunable creatures, such as uniques, even up to Act Bosses (Although you have to get close enough first.) Unfortunately this skill isn’t usually so great for LE creatures, since they usually come in mobs, so the range won’t nearly cover them all.

Battle Orders is one other skill which perhaps might be useful. As we’ve already said, the Barbarian has some serious mana issues, so until you’ve had a chance to pump Energy, this skill is a must. Even at level 1 (with your +skill equipment) this skill adds significantly to the mana and life of your party while active.

Considering the Barbarians other skills Potion Find is again useful (you’ll need a lot of potions early on, using up so much mana,) and everyone likes a bit of Item Find (particularly considering the + to skills on your equipment). Iron Skin and Natural Resistance might be worth the investment too, but just make sure you don’t overload on these skills and neglect the Warcry + Synergies.

Which ones are important?

To state the obvious, the trouble with stats, is that they are always in motion – the proportions change as you go through the game. Since the Kiai Master uses a skill which one needs to be level 30 to even acquire (War Cry), there are a lot of levels to get through which you’re going to have to rely on your sword, or a friend to help you with.

Although the governing statistic later on, in the early levels, Energy is not an issue, but it becomes immediately important as soon as you hit that level 30. There is almost no way you will have enough mana to cast the skill effectively straight out at level 30, but luckily, if you’ve been putting your skills in the right place / have the right gear, you shouldn’t need to cast it very much until you get to higher levels. Still, it’s important to try and put some stat points into Energy early, to help out later on.

Strength is again, a strange stat. It’s probably going to be important early on if you use melee weapons, but at level 30 it stops being relevant except for the purposes of equipping armour, so try not to go overboard – put in as little as possible while still being able to kill things – I would approximate about 60 Strength should be enough to push you to level 30. – And the purists will probably want to try their luck with no added Strength at all. ::>

Dexterity is pretty much just like strength early on - it’s obviously useful for hitting things, and not getting hit yourself. If you can stash any melee weapons you find with + to Warcries on them, you might consider using a bow entirely up to level 30, and therefore only needing enough Strength to equip your items, and putting the rest in Dexterity, where it will be useful for dodging missile attacks later on. On the other hand, gear with + to life and defence is easy to find, so I don’t think the situation is really that desperate.

In my opinion, points would be better going into Vitality than Dexterity, since the Barbarian gets a whopping 4 life for every point in Vitality, but since life for the Barbarian is increased by 2 each level anyway, you shouldn’t really need to many points in Vitality either, so the minimum is what we need once more. Remember that once you get Warcry, you’ll mostly stun any opponents, so you won’t get hit too often anyway. – except by ranged attackers.

This is all pretty obvious stuff, so I don’t need to spend long here. + To skills can be found in Amulets, Barbarian Helms, and Weapons up to level 3, with +2 being relatively easy to find. You might also want to look out for the low level “Berserker’s Hauberk” set item, which gives you a cool +1 to Barbarian skills for your new-ish character as well as quite good defence.

Moving on from skills, the next major concern is mana, which is quite low in this build, so a Crafted Caster item would be a definite boon. As with any casting build, if you can find any “+ to Cast Speed” items, they are worth hanging on to as well – a 10% faster casting rate in the long run means 10% more damage from casting in any given amount of time.

Resistance is a good idea in general, and in particular, resistance to Lightning is what we want to see maxed. Also anything you can find which reduces the amount of damage missile units can do, or increases your defence to missile is a useful commodity.

Finally, one great thing about the Kiai Master, is that compared to a lot of other builds, this character will kill lots of creatures very fast, without having to target one at a time. This means that Magic Find is a distinct possibility, so if you can find any +to find magic items, it might be useful if you can spare the slot.

Having said all that, you should be ready to try the build out for yourself. Just follow this flow diagram and you shouldn't go too far wrong. 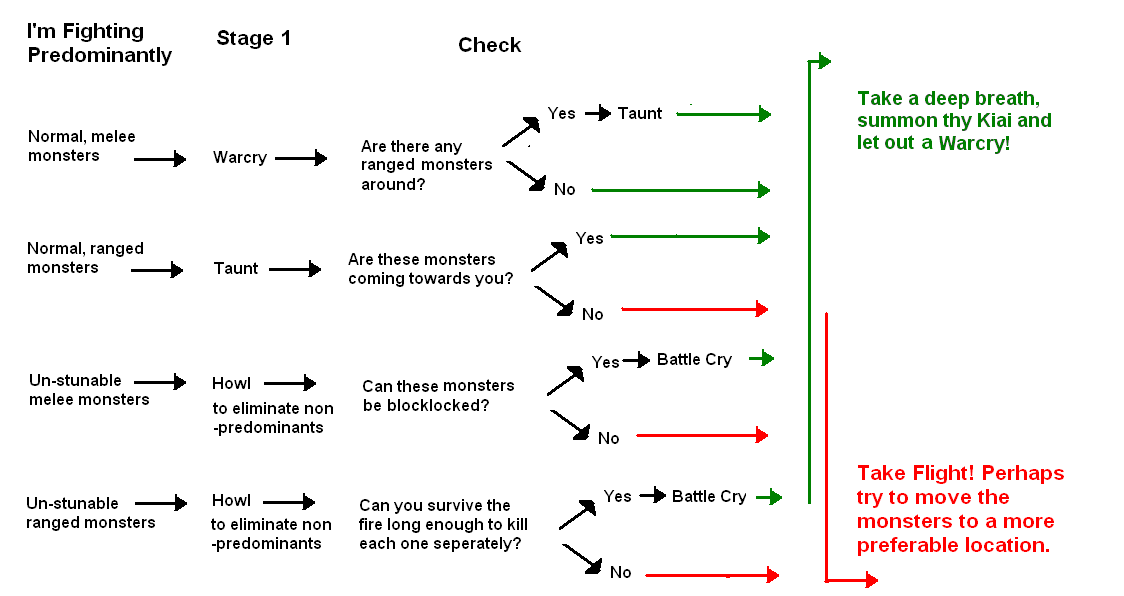