The D2X sets are much improved from D2 sets. There are new sets full of class-specific, Exceptional, and Elite items that have stats comparable to good Rares. Vastly more powerful than the Diablo II sets, and they have partial set bonuses and hidden item bonuses on top of that.

The old Diablo II sets are improved in the Expansion as well though. The items in them have the same stats when found individually, but they have special partial bonuses and hidden item bonuses when equipped with one or more other items from the same set. 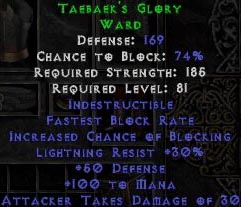 Elite Set Item
Item Sets were meant to be one of the coolest features of Diablo II. There were going to be noticeable effects when the whole set was equipped, including different graphics on your character in the game, and of course huge secret bonuses.

Unfortunately, as Blizzard has admitted, this very cool concept isn't implemented all that well in Diablo II. Set items aren't good enough to wear on their own in 95% of the cases, and the set bonuses aren't that good either. But there are improvements in Diablo II: Lord of Destruction.

They are hugely improved in the Expansion. There are 16 new sets. Individual set items have lots of mods, as many as Rares can have. There are also Exceptional and Elite items in sets, and some sets made up entirely of these. There are even Class-specific item sets, only usable by one character.

Another great bonus is that sets give partial bonuses in D2X. You don't have to have a whole set to get a bonus. If you have just two (or more) of the individual items, you get some amount of bonus, though much less than the bonus for the whole set.

The way partial bonuses work is that if you have any two items in a set, you get one bonus. Any three (assuming the set has at least four items) you get another better bonus. And so on, up to the full set. The largest set in the game has six items, so there is a different partial bonus for any two items equipped, then any three, or any four, or any five.

So the most items from a given set that you are wearing at once, the better your special bonus. You have to decide if putting on the last item in a set, and adding the full special bonus was better than wearing the Rare or Unique you had in that item slot otherwise.

Sets should be more grouped as well, with items of similar quality, rather than quilted armor with a gothic shield and long war bow, for example. All high quality or medium quality or low quality items in the same set, for the most part.

In Diablo II there are non-random odds for which set item will drop if there is more than one of that type item in different Item Sets. Scroll down this page into the D2 Sets info for details. This bug is fixed in D2X, and might be patched back into D2 at some point.

Item Sets are one of the coolest features of Diablo II. They consist of various unrelated items, all of them wearable on their own, but with a special secret bonus if you equip all the items in a set at the same time. Pre-game, Blizzard North talked about them having amazing special bonuses and being visible on your character to anyone. Huge bonuses and glowing graphics, at the least, were expected.

Unfortunately, as Blizzard has admitted, this very cool concept isn't implemented all that well in Diablo II, and it will be improved in the Expansion. There are numerous changes to Item Sets in the Expansion that make them much more useful and powerful, such as partial bonuses from less than a full set, Exceptional items in sets, and several entirely new sets.

Until then, there are still useful item sets in Diablo II. All set items have a set minimum character level requirement to equip any or all items in the set. You must of course meet the strength and/or dexterity requirements to equip any specific item as well.

Set items drop more frequently than Unique or Rare items, but less often than magical. You can gamble for set items as well, and there isn't any limit to how many of them can be found in a game. It's not uncommon to find two of the same set item in one area, or to gamble the same one several times in a game, and the less expensive item types to gamble are easily obtained with some patience.

There are sixteen Item Sets in Diablo II, and no Sets are meant to be harder to find than others. They are not weighted, and any monster that can drop an item of a particular type might drop a Set Item. However, due to the way the game picks which item to drop, if a particular item type (such a ring or amulet) is found in more than one set, some Set Items are much more commonly found than others.

The odds are based on how many sets in a row, in the game's internal listing, do not have that item in them. The more in a row after a set that does, the better the odds that set item will drop. All odds are the appropriate multiple of 1/16, which is 6.25%.

There is no way to circumvent these odds. Set Items aren't like Uniques, where the game won't drop one if that item already exists in the game. You just have to keep killing monsters that can drop the type of item you want, or keep gambling them, and eventually you'll get the one you want. It is unknown (but likely) if there will be any changes to how this works in the Expansion Set.

Why does this happen? Here is the internal listing order of sets that the game generates the drops from:

(wraps back to top)

The game first picks an item type, (say a ring, for this example), then scans the sets for rings. As soon as it finds an Item Set with a ring it remembers that, and continues down the Item Set list until it finds another Set with a ring, and drops that one.

If there is only one of an item type in all the sets, you always get that one (of course). If there are two or more, then the order these sets are listed in will determine the odds. Note that before Cathan's there are 10 sets, and before Angelic there are 6 sets. Remember that the game finds an item in a set, and then looks to the next set going down the list and generates that one.

If there were an item found in only two sets, and those sets were listed right in a row, then that item would be 93.75% chance from the lower set, and only 6.25% from the upper set. This doesn't happen, though some of the amulets do have only a 6.25% chance of dropping.

There doesn't appear to be any logic or reason to the order of sets here, they don't go alphabetically or by number of items or Clvl requirements. Probably these are just the order they were created and added to the game code by the Blizzard North designers. The non-random selection isn't a disaster, but it would be nice if it weighted them evenly, or perhaps made the higher Clvl sets drop less frequently, since they are theoretically higher quality. Note that if there were a set with two of the same type of item (rings, obviously) that only the second one in that set would ever drop, given how Set Item generation works now. 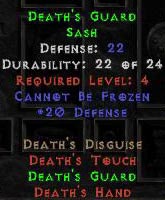 What's What
All veteran Diablo II players know about Item Sets, but if you are new to the game here is an introduction to how they work and what the various color stats mean.

The text for the item name and type is in green, as you can see. The next two lines in white are the basic item info that you would see for any sash. Armor Class and Durability. Both of these vary slightly from sash to sash, and will for this Set Item sash as well. Next down we have two blue lines, indicating that they are the magical properties. As you can see, "Cannot Be Frozen" and "+20 Armor Class" are the magical properties of this item. The +20 AC is a huge boost for a belt. Notice that the total is 22, so the sash had only 2 AC, a typical value for this sort of item. The "Cannot be Frozen" is a bit misleading, since characters can never be frozen, just chilled. But the meaning is the same, you won't ever be chilled or turned blue/slowed down with this on.

Below the blue magical properties lines you see the name of the set, Death's Disguise and the other three items in the set. The green one is of course the current, equipped item, and Touch and Hand are the other two yet to be found. Set items that you have not found are listed in red. Items that you do have, whether they be equipped or in your inventory are green.