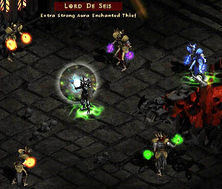 Back when he was really dangerous.

Lord de Seis is Undead, and an Oblivion Knight.

Lord de Seis is one the 3 "Seal Bosses" found in the Chaos Sanctuary in Act Four. De Seis is freed by opening the rightmost seal.

Oblivion Knights are one of the most feared monsters in the game due to their ability to cast dangerous curses. Iron Maiden is the most dangerous, a curse that has caused countless melee fighters to kill themselves in just one or two hits. It has no effect on ranged attackers though, so Sorceresses, Bowazons, and other ranged attackers have little difficulty with de Seis or Oblivion Knights in general.

Prior to v1.07 Lord de Seis was much more dangerous, since he spawned with a full boss pack of Oblivion Knights. Since the v1.07 patch he's become much easier, since he now spawns with Doom Knights.

His aura was also changed in v1.07, from Conviction to Fanaticism.

Prior to v1.04, Lord de Seis had the Thief property, an unusual monster modifier.

Initially this caused equipped items (including weapons) to drop onto the ground.

This was later nerfed to instead target things in the belt.

Eventually even this was removed from the game in v1.04.

Lord de Seis is always Extra Strong and Aura Enchanted (Fanaticism currently, Conviction prior to v1.07.) He gains 1 random modifier on Nightmare and 2 on Hell.

Like many other SuperUniques, Lord de Seis does not regenerate hit points.

All SuperUniques (except for Uber Diablo are found in roughly the same location every game, on all three difficulty levels. (Except for the Uber Monsters who are only found on Hell Difficulty.)