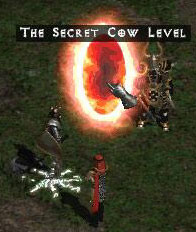 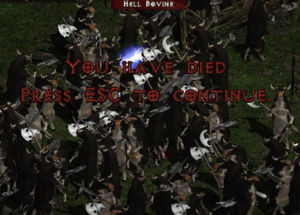 favorite joke/absurd rumor from Diablo I, the "Secret Cow Level" is a reality in Diablo II, and it a lot of fun to check out when you get a character through the game once and have a chance. The funniest part of the area, especially the first time you arrive, is the sounds of the cows. They are all quite funny, giving forth these deadpan "Moo's", sounding just like a person saying it. Obviously some of the Blizzard North crew had some fun doing their worst cow impressions, and when you hear it in the game you will be cracking up immediately.

After all, what's a Secret Cow Level without some laughs?

Very few things changed for the Expansion. Really the only difference is that in the Expansion you now must kill Baal before you can enter the Secret Cow Level. This makes sense, he is the end boss now, rather than Diablo. Other than that everything is just the same. You can apply Druid and Assassin strategy just the same as other characters. The Cows will be more difficult on Hell now with the 50% physical resistance, but if you are playing Hell you'll be used to that.

You must finish the game first (Kill Diablo in D2, Kill Baal in D2X), and then go back to Act One on the same difficulty level, and execute the recipe, which is to transmute Wirt's Leg and a Town Portal tome in the Horadric Cube while your character is standing in the Rogue Encampment.

So once you beat Baal in Normal Difficulty in the Expansion, create a normal-difficulty game, go back to Act One (use the waypoint to move between acts) and you can open up the Cow Level portal. You don't need to carry around Wirt's Leg forever for this; just go back to Tristram any time and click his corpse to get a new one.

As for the Cow Level itself, it's about what you would expect. Cows and more cows, called Hell Bovines, appear in huge, almost never-ending herds. Full stats for them can be seen here, on our hosted monster site, Darkness. By far the most tightly-packed monsters you see anywhere in the game can be found in the Cow Level. Every cow looks the same, there is no variation in coloration or weaponry at all. They all have massive polearms, and do quite heavy damage when they strike you with their very fast attacks. However their foot speed is very slow, and for that reason they aren't especially difficult to deal with one on one.

Somewhere inside or just outside of the "fort" as it's called, you'll find the Cow King. He is always Lightning Enchanted, and hits like a truck. More on him further down this page.

Read this portion of our MF Javazon Guide for more details. To recap, you will be unable to open the red portal if you:

This is how the game works now, in v1.09d, as of March 5, 2002. This will probably be changed in v1.10, since repeated Cow Level clears are such a cheesy way to get big exp that Blizzard is planning on making some changes, either to the exp gained there, or how often a character can enter the Cow Level.

Cow King and his treasure.

You can see full stats for the Cow King right here. He doesn't differ in appearance from the other cows in any way; no crown or different coloration or longer horns, though on hell he often is Aura Enchanted, so you'll spot him by that. There are often other Cow Bosses in the area though, and with them all identical it's often hard to tell if a monster is the king or not until you kill some to clear out the mob. The King is always Lightning Enchanted, so that's one way to tell him immediately.

Prior to v1.08 the Cow King was a guaranteed special drop, like the Act Bosses, though only two items. Uniques and Sets were almost guaranteed from him with some MF. In v1.09 he's been toned down, and he only drops at about the level of a SuperUnique now. On Hell his Treasure Class is much lower than that of the normal cows, so he can drop at best the lowest quality Elite items such as Bramble Mitts, Dusk Shroud, Shako, etc.

Besides the random Cow bosses and the King, there are often some Champions. These are the same color as normal cows also, unlike champions of other monster types, which are always a different color. Ghostly Cow Champions are transparent, however.

A couple of random Bovine Bosses.

One mystery/complaint about the cow level is this: Why didn't Blizzard put in palette shifts for the cows? It wouldn't seem very hard to do, every other monster in the game has 3 or more excellent color combinations, and it would make it a lot more fun if the cow bosses and champions looked different, and also they could be a new color on nightmare and hell difficulty. Be sure and tackle a Blizzard North employee when next you meet one and sit on him or her until we get an answer this question.

The Cow Level is best cleared by Javazons or Nova Sorcs, though any character can do well there with proper equipment and strategy. Attacks this hit multiple targets at once are the best, since there are always dozens of cows on the screen. Corpse Explosion Necros, Death Sentry Assassins, WW Barbs, etc.

The basic strategy for the level varies a lot. If you have a powerful area attack, you want to run wildly, getting as many cows following you as possible. This is known as "herding". Run around the mobs, "knitting" them into bigger packs, so you can attack huge mobs at once. This is especially effective with Javazons, as described in the strategy guide linked to above.

Characters with less powerful skills will probably want to take on the cows a few at a time, and should advance slowly and carefully.

The cows have a fast swing with their halberds, and they do big damage, so you want to not get hit much, if you can help it. If your character has a nice ranged attack, especially with some area effect, this level won't be too hard, and you can run around freely, attracting the largest herds possible, and hitting dozens of them with each attack.

All in all it's a fun level, and it's very cool of the Blizzard North design team to put it into the game, after all the rumors and jokes about it in Diablo I. We first had a hint that there might be something like that over a year ago, when the shot you see to the right was posted as a Screen Shot of the Week, on April 1st, 1999.

Given the date it was posted, it was taken to be a joke. Little did we know. The Cow Level in the final game isn't the same as that shot, since you get only cows, and there isn't any Cave portion to the level, but the cows are just the same, and no doubt the decision to include the SCL in the final game had been made by then, and they had already done the art work and rendering to create the cow's in-game sprites.