Shrines are found scattered all through the game; mysterious statues of all shapes and sizes, imbued with strange properties and enhancements. Characters who find shrines and activate them receive various bonuses, almost all of which are positive.

Shrines in Diablo II are toned down from the way they functioned in Diablo, both in variety and effect. No shrines in Diablo II have a permanent effect, except the item-granting Gem, Exploding, and Poison Shrines, and none but the Fire Shrine, Monster Shrine, and Evil Urn are anything but an outright bonus. Shrines were unchanged in the Diablo II expansion, no new types were added or old types changed. All shrine names in Diablo II are self-explanatory, and while most can be recognized by the icon floating above them, all display their type when pointed at.

Shrines come in many, many shapes and sizes - various screenshots of them are scattered down the right side of this page. There is no correlation between the shrine type and function -- Armor, Defense, Combat, Mana Regeneration, etc, can all appear on the same shrine graphic. This is not true of the various types of wells; mana, health and refill shrines always look the same; pools of red or blue liquid.

Act 3: Surface
Most types of shrines "regenerate," meaning they can be used again after several minutes. This can be helpful if you find one in a busy area, and remember where it was. Shrines like Combat, Skill, and Mana Regeneration have a duration not much less than the regeneration time, and wise players often take their chance to return to town, killing a couple of minutes in the knowledge that the shrine will be ripe again when they return.

Shrines that deliver a duration-based bonus do not stack; clicking a second shrine while under the effect of a first will dispel the first shrine bonus. Shrines of the same type do not stack either, after v1.07. Prior to that (in D2C) it was possible to stack up bonuses of the same type of shrine to ridiculous levels. Multiple Armor or Combat shrines could result in defense or attack ratings in the hundreds of thousands, but this "feature" was removed with the first patch of D2X.

Most duration bonus shrines will cancel, or be canceled by, curses. It's nice to have a shrine (or a well) nearby after defeating a Cursed boss on Hell difficulty. By the same token, running into a random Cursed boss just after activating a helpful shrine is damn aggravating.

These types of shrines work like potions. They instantly fill up health, mana, or both when clicked, but have no lasting benefits. They come in a variety of graphics, differing between tile sets and acts, but they are always recognizable as pools of red or blue liquid.

When you find one of these, it's best to exhaust your mana before using these. Go all out with spells or high-mana cost attacks, then click for the free refill.

Health Shrines provide an instant, fill life refill. They do not benefit minions.

Refilling Shrines are basically full rejuvenation potions. One click instantly refills your life and mana bulbs. There is no benefit to your minions, and these shrines do not cure poison or remove curses.

Wells refill 50% of the maximum life, mana, and stamina, of the character and all his/her minions. Wells also cure poison and remove curses. Two uses.

Wells allow two uses, and each "half" refills in 30 seconds, on a separate timer. So if you drank once, then again 10 seconds later, one half would fill up 20 seconds after that, and the well would be full again 10 seconds after that. Wells can be quite useful for low level characters in Act One; in particular, Sorceresses and casting Necromancers who are still at that early "always out of mana" phase can use a well for their headquarters; running out and leading mobs back to it repeatedly. By the time one pack is killed, loot is picked up, and another pack is led back to the well, it should have refilled itself.

These shrines provide a bonus that lasts for some time, as indicated by the icon glowing over the character's head. None of these shrines share any bonuses to a character's minions.

Armor Shrines add 100% defense. This bonus works on a character's total defense, after all other spells and bonuses are factored in.

Combat shrines add substantially to damage, but the bonus is just to the equipment damage, not the total output after strength or dexterity bonuses are counted. As a result this shrine doesn't even double the damage, much less triple it. The biggest change it makes for many characters is to their AR. As an example, a typical high level character might go from 3500 to 4500 damage, but from 5000 to 12000 AR. Increasing your to/hit from say, 70% to 91% makes a very noticable difference, especially to fast attacking characters like Bowazons, Zealots, Frenzy Barbs, etc. Combat shrines demonstrate that many low AR characters would probably be better off with a Blessed Aim merc than the usual Might merc... but the lure of higher listed damage is difficult to resist.

The bonus from this shrine is quite impressive. +400% Mana Regeneration Rate is a huge bonus; The Sorceress' level 20 Warmth is only 258%, and this shrine is an oasis in the low mana desert for low level spell casters. Like all regeneration spells, this one causes a % of the character's total pool to refill every second -- the more total mana, the more refills every tick. As a result, this shrine doesn't do that much for characters with very low mana. 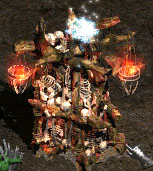 Stamina Shrines instantly refill a character's stamina, and prevent any stamina drain, no matter how much they run, for the duration of the effect.

There is no bonus to running speed from this shrine, though it often seems that way to players in heavy armor, who are accustomed to frequently slowing to a walk to regain stamina.

The character's fire resistance is increased by 75%.

The character's cold resistance is increased by 75%.

The character's lightning resistance is increased by 75%

The character's poison resistance is increased by 75%.

Experience shrines boost all experience gained by 50% for the duration of the effect.

Experience shrines are the most popular in the game, and are one of the few shrines that can affect play styles, as they spur players to rush madly along, trying score as many kills as possible while the bonus is still in effect. If an Experience shrine is found near the end of an act, it's best to save it, then activate it just before taking on, or killing, the Act Boss.

Experience shrines are sometimes jokingly referred to as "Curse boss summoning shrines" for their seemingly uncanny ability to cause a cursed boss to appear shortly after being activated.

Skill Shrines add +2 to all skills for the duration.

The bonus skills are most helpful to spell casters, but all characters can benefit from this shrine. It's helpful to summon minions while so buffed; Valkyries, Shadow Masters, and Golems summoned while skills are boosted retain the higher level bonuses they were summoned with for as long as they survive.

Randomly selects one gem from the inventory, and upgrades it one level. If there are no gems, or only perfect gems in the inventory, one random variety of chipped gem is dropped.

Creates a Town Portal that any character can use. It remains open for the duration of the game, no matter how may characters pass through it in either direction.

Turns one normal monster into a Champion type, or a boss. The new boss gets the same stats as any random boss of its type would have, and drops two items plus potions, etc. This shrine can make any normal monster into a boss,including creatures that can not otherwise appear as bosses, such as Flying Scimitars and Vile Children. There is a radius of effect of about 2 screens; if there aren't any monsters in that range, the shrine will do nothing.

It's wise to prepare before clicking this one. Clear out most of the screen, then lead one or two monsters towards the shrine when you're ready. Using this one on a busy screen is a bad idea; consider how you would react to the sudden appearance of a boss with Fanaticism, or Might, when you've already got a dozen tough monsters closing in for battle?

Emits a burst of fireballs that instantly takes half the hit points from everything in range (characters, minions, monsters, etc). This can be a very useful shrine to hit a big boss with; for instance if one is found in the Chaos Sanctuary it should be saved until Diablo spawns.

Act 1: Caves
Shoots out a blast of monster-damaging explosions in all directions, and drops 5-10 exploding potions. The damage from this shrine can be useful to new characters, but it's largely a novelty after the early levels of the game.

Shoots out a poison cloud that will only damage monsters, and drops 5-10 poison potions. The toxic gas can be dangerous to nearby monsters in Act One, but it's largely a novelty after the early levels of the game.

These chest-like objects are found only in Act Five. They work like Russian roulette, super monster shrines. They usually drop several stacks of gold, but also have a very good chance to summon a champion type monster, or a boss and its whole boss pack. These enemies will appear somewhere within about half a screen of the Evil Urn, and they can appear directly on top of the character that clicks the urn, so be warned and be ready.

When Urns are found near level entrances/exits they will only drop gold or items, since no random monsters can spawn in those locations. For example, there's always an Evil Urn found in the Arreat Plateau, near the entrance to the Crystalline Passage, beside Thresh Socket, that only drops gold stacks. This is thought to be an error in the level design.