Using the Horadric Staff.
There are seven tombs of the Horadrim in the Canyon of the Magi. Each has a symbol on a pillar in front of it, and if you have defeated the Summoner your Quest Window will tell you which is the true tomb.

Inside one of them you'll find the Orifice. You must insert the completed Horadric Staff into the orifice, and it will put on a pretty light show and break open a wall, leading down to Tal Rasha's tomb.

Prior to Duriel being nerfed in v1.09, this was probably the single-deadliest spot in the entire game, as the massive Lesser Evil Duriel awaits you inside the small tomb, and he hits very, very hard. It's a very good idea to do this part of the game with some tank character or minions if you aren't a massive melee fighter type character with hit points galore. This is especially true on Nightmare and Hell. 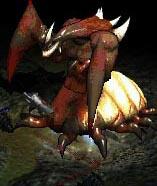 Duriel.
Duriel has a huge damage charge attack, but once you close to melee range he's less deadly, with a bash and jab attack. He also has a Holy Freeze aura, so you'll always be slowed down as you try to run from him and will be hitting him more slowly as well. Lots of hit points and a minion or two to take the initial charge from him is required, unless you have Barbarian or Druid style huge hit points.

Once you defeat Duriel he'll usually drop some pretty good stuff. A doorway opens up to the left, and you move through it and down a long hallway until you encounter Tyrael. He tells you that you are too late, that Diablo and Baal/Tal Rasha have already escaped, and opens a portal for you to return to town.

Once there you need to talk to Jerhyn, which officially completes your quest and will allow Meshif, the ship's captain, to take you on to Kurast and Act Three. 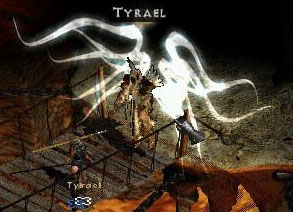 Tyrael at the end of Act Two.
Tips: The seven tomb entrances and the Canyon are always the same layout. From left to right they are Circle, Crescent, Square, Broken Box, Double-V, Triangle, Circle-Crescent. You can memorize them or draw a little map, and when you get to the Canyon after doing the Summoner and learning which is the correct tomb, you can check your map and go right to the entrance. Quicker than roaming around the perimeter of the Canyon, though many people like to clear it all out for the experience anyway.

Often on Battle.net you'll be in a game created by someone who hasn't done the quest yet, and it will be impossible to enter the Palace to click on Jerhyn to get him to finish this quest and allow you to sail with Meshif. You can either stand by the entrance to the palace and wait for him to come closer, or take the waypoint to the Palace Cellar or even the Arcane Sanctuary and then run up through the Palace to come up the stairs inside and reach Jeryhn that way.

I have heard of your many deeds of skill and bravery. I feel I can trust you with something I have been hesitant to speak of...
Drognan and I have concluded that the Dark Wanderer who passed through here recently was Diablo, himself! Drognan believes that Diablo is searching the desert for the secret tomb where the great Horadric mage, Tal Rasha, keeps Baal imprisoned.
You must find Diablo and put an end to the terrible evil that has fallen upon our city. Drognan is wise and is sure to have some helpful advice for you as to how Tal Rasha's tomb may be found.
It may take you quite some time to find The Tomb. May you be ready when you do.

I've heard legends of the Tomb of Tal Rasha, but I thought they were just old tales meant to scare young children.

Diablo nears his goal. We have little time to lose.
Remember, my friend, that Andariel gave herself willingly to Diablo's cause. It would be prudent to assume that the other Evils will attempt to aid their master as well.

Tal Rasha's tomb is hidden deep in the desert among six others. Tal Rasha's symbol marks the True Tomb. If you want to know what that symbol is, you should be able to find it within the legendary Arcane Sanctuary.

So... You're going to search for the Seven Tombs, huh? Don't you know that they're just desert legends passed between merchants and travelers? No one really believes that they exist.

Legend has it that Tal Rasha lies imprisoned within his tomb, forever struggling to keep the Lord of Destruction bound. His was a selfless act, although perhaps foolhardy.

If you're going into the deep desert, why not hire a few of my men to watch your back?

It is well-known that there are seven great Horadric tombs hidden beneath the sands in the furthest reaches of the desert. One of them surely must be Tal Rasha's prison. You must explore each of the tombs to find Tal Rasha's exact location.
Of course, Diablo is searching for the Tomb as well... No one can guess as to what terrors he has unleashed in his search.

When Tal Rasha chose to embody the spirit of Baal, he knew his doom was to wrestle eternally against the will of the greater Evil. Look around you and ask yourself, 'Has the battle been won or lost?

I'm sorry, I can't help you much here. Now, if the tombs were across the ocean, then I'd be the guy to talk to.

Be very careful, my friend. I think I've seen enough recently not to doubt that these Tombs exist. And if they do, they're most certainly guarded by terrible creatures.

You have proven to be the greatest of heroes, and I am honored to call you friend. Thank you for bringing peace to our lives again.

The Archangel Tyrael was the one who gave the Soulstones to the Horadrim two hundred and sixty years ago.
It is highly unusual for the forces of Heaven to so directly interfere with man's destiny, but Tyrael was said to act of his own volition. We have never been able to discern why.
Perhaps, he goes against the consensus of Heaven because he doubts our ability to defend ourselves, or perhaps, he sees more threat than his peers.
Where the actions of Hell often seem straightforwardly bent on destruction, the motives of Heaven are unfathomable.
Now make haste... Both Diablo and Baal must be stopped before they join with their brother, Mephisto. If the three Prime Evils unite once again, the world as we know it will be no more.

This is a serious setback... It is most unfortunate that Tal Rasha has been consumed by Baal's destructive influence. There are many secrets known to the Horadrim, which could be used by Baal against us.
You must travel east by sea to Kurast and stop Diablo and Baal before they free their eldest brother, Mephisto.
Hahh... The lands of the eastern Empire are not the same as they used to be. There has been little word for some time.
Speed is of the essence. Go quickly, my friend. May the fates smile on you.

I heard that Diablo has managed to best you, at least for the time being. I hope you catch up with him soon, and send him back to Hell for good!

This is terrible news! Baal is in possession of one of mankind's most powerful mages, and the Lord of Terror guides his path. They must be stopped, for I am sure they mean to free their elder brother Mephisto, the Lord of Hatred, who lies imprisoned under the corrupted city of Kurast.
I fear you are walking into a great evil, but your faith can save you. May you walk in the light always.

You're an inspiration! And such a hero that it makes me look twice as bad...
Ahh, you're OK... Hey! Just save some glory for us little guys, huh?

I've heard that your foe got away from you this time. Well, look at it this way... you've got the demons on the run. If you're going to be leaving, then... Well, thanks for your help.

You have done very well. Few could have come this far, let alone discover the True Tomb of Tal Rasha. Unfortunately, I hear that Diablo and Baal have eluded your grasp. This is most unfortunate...
If you wish to travel East, I have authorized Meshif to give you passage by sea. I imagine he should be very anxious to leave by now.
Good luck on your quest, and thank you again for saving my beloved city. You will always be welcome in Lut Gholein, my friend.

I'm sorry things didn't turn out as you had hoped. Go and remember us fondly. You know, you bothered me far less than most.

Jerhyn tells me I should take you east to Kurast. I haven't been there for several years, but rumor has it that things are pretty grim.

I thank you, mortal, for my freedom. But I did expect you earlier.
I am the Archangel Tyrael. I came here to prevent Diablo from freeing his brother, Baal. But I have failed. Now, Terror and Destruction roam free throughout your world.
Even now, they head towards the Eastern capital of Kurast - to the very heart of the Zakarum Temple. There they hope to find their eldest brother, Mephisto, the Lord of Hatred who was imprisoned there ages ago.
If the three Prime Evils unite, they will be invincible. Though it is unclear as to what their aims are, it is certain that they must be stopped at all costs.
I am broken and the energies that tie me to this world are diminishing rapidly.
You must take up this quest and prevent the Three Brothers from reuniting. You must cross the sea and search for Diablo and Baal in Kurast.
Now hurry, mortal... Time is running out for all of us!

Never fear, my friend. You did the best you could.
I suspect that Diablo and Baal are now heading east, towards Kurast. You'll find them... I know you will.