While there was some amount of item hacking going on during the days of D2C, it wasn't until after the release of the expansion (D2X) in June 2001 that hacked items began to really proliferate. Blizzard's response to this, for about the first year, was to say nothing publicly, while behind the scenes they tried to close the loopholes and patch the bugs that were allowing the hacked items to be created.

This response seemed woefully inadequate to most players, and after many months of constant angry fan feedback and a few fiery editorials, the Blizzard hacks team started to get serious about deleting hacked items in mid-2002. This page collects news posts about those anti-cheating efforts, all rescued from the old Diabloii.net Warnings Archives.

Blizzard's anti-cheating efforts have improved a great deal in the years since then, primarily since they've fixed most of the bugs in the game that allowed these items to be created in the first place, but also since they've grown more serious about directly combating player cheating, with account bans and character deletions.

Blizzard may at last be enforcing their own rules, and doing something to try and stop cheating. They say they've deleted a number of accounts for hacking:

In keeping with our aggressive stance against hacks and cheats, we have deleted accounts that were caught using hacks (including but not limited to duping hacks and server-crashing or game-terminating hacks).

We will continue to monitor the Battle.net Realms for malicious players. Be aware that if you are caught using a hack, your accounts will be deleted. We regret having to employ these extreme measures, however, certain unscrupulous players impair the gameplay of the Diablo II community as a whole, and severe action is now both warranted and required. We appreciate your understanding and cooperation in this matter.

I've not heard from anyone who got an account deleted, or even who had a friend who did, while we get a dozen mails a day from people pissed or confused over their duped or non-duped items vanishing. So either Blizzard deleted very few accounts, or the people who were deleted are saying quiet about it.

Since it's just accounts, whether or not this makes any difference is unknown. Most big time hackers/dupers have dozens of accounts with mules full of dupes, hacked ex-runewords, etc, so losing one or two accounts can't be much of a big deal to them. And maybe it'll just spur them to cheat more, to recover their losses.

In my opinion, Blizzard needs to ban CD-keys, as well as deleting accounts, and they need to post the names of them publicly, or at least list how many were banned, ideally in a scrolling list on the right side of the Battle.net chat interface. If cheaters start seeing twenty or fifty accounts/cd-keys banned every day, they'll perhaps start to get the message that cheating is serious, and that it could happen to them. I doubt a message on Blizzard's Bnet Status Forum will really have much of an effect on people who have been cheating without any punishment for months and months. But time will tell.

The following is a mail you get from Blizzard if you mail asking about hacks. We've received it several times when forwarding mails to [email protected], most recently today.

In keeping with our aggressive stance against hacks and cheats, we have deleted accounts that were caught using hacks including but not limited to duping hacks and server-crashing or game-terminating hacks).

We will continue to monitor the Battle.net Realms for malicious players. Be aware that if you are caught using a hack, your accounts will be deleted. We regret having to employ these extreme measures, however, certain unscrupulous players impair the gameplay of the Diablo II community as a whole, and severe action is now both warranted and required. We appreciate your understanding and cooperation in this matter.

Currently Diablo II realms are very unstable due to the effects of duplicate items upon the servers. We are working to fix this instability as quickly as possible.

Also, we have fixed crashes involving Druids wearing items totaling +13 to all skills, and a bug with +20 to wereform when switched to that wereform.

The Diablo II Realms now scan characters for duplicate items. If a player is found to have more than one of the same item, the duplicate items will be deleted leaving just one of that item.

Q: Why have some of my items of a certain type vanished?
A: Character files were scanned for duplicated items. All duplicate items but one were deleted.

Q: What items were selected for deletion?
A: All rare and unique items were scanned for duplicates.

Q: Why did Blizzard Entertainment only delete some of the dupes, and not every dupe?
A: Blizzard Entertainment wants to maintain an enjoyable and balanced play experience for every user. To that end, we removed all but one duplicate item. We're making an effort to protect those players that legitimately traded for those items.

Q: If I gamble for two Unique items of the same type (e.g. two Stones of Jordan) or find them by killing monsters, will they be considered dupes and deleted?
A: No. Items legitimately gained through gambling or dropped by monsters are not duplicates, even if they have the same name.

Q: Where can I report hacks or exploits?
A: You can send your reports to [email protected]

A few points. SoJs aren't being deleted, we've heard from dozens of players who have mules full of them and say none are vanishing. You can read more along these lines in a FanSite interview on hacks right here. Bill Roper answers 10 questions, but sadly none of them are anything new, just more of the same PR-style replies.

We received this screenshot Dr. Bond; it was taken in the Blizzard Technical Support Channel. (He blurred his char's name to avoid being pestered.) 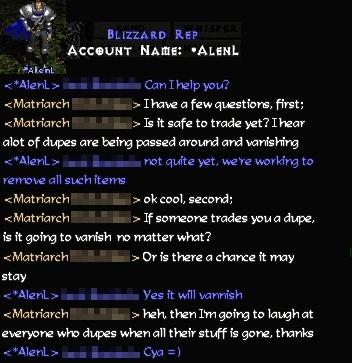 AlenL is a real Bliz tech support guy, and this is a legit screenshot. We asked Blizzard PR about it, and were told.

It seems like, in the course of editing together the image you sent me, Alan ended up being taken somewhat out of context. As for what exactly we're doing on duping, I don't want to say, since we don't want to show our hand too soon. Just know that our efforts are ongoing in this matter, which remains a high priority for us.

We try and have faith, but being as Blizzard has been saying this exact same thing about duping since about 1998, and the dupers/hackers have owned the realms for months, it's hard to remain optimistic. We've been told of secret plans for improvements for so long... This time they really mean it though!

In all seriousness, we have heard some cool plans for (secret) anti-cheating measures being added soon, possibly with v1.10. And no, we can't say what they are.

We received the following email this afternoon:

Just to let you know, I had two skill hack items. The negative dex crown and gloves. I only play private passworded games, I logged in today and they are gone.

Looks like blizzard is cleaning up some of those types of things.

A couple of hours later Blizzard posted the following:

We have begun deleting corrupted items from Diablo II characters on Battle.net. These corrupt items were created with illegal duping hacks and are clearly identified by their illegal bonuses or negative modifiers to skills and statistics not modified by the Diablo II game. We are removing these items from the game and are closing the loophole that enabled them to be created.

This extreme step is necessary to provide an enjoyable Battle.net environment for our legitimate users. Note that we cannot restore any items lost as a result of this measure. If you observe evidence of hacks or duping, please contact [email protected]

So it appears Dimas told no lies. The corrupted/hacked/bugged items are what make the infinite skills hack possible, so if they all vanish, then so should that hack. With any luck.

Players are reporting odd vanishing items. Some bugged gone, some not. Possibly Blizzard has to delete each type of bugged item individually, and can't just nail them all instantly. A report from Antonio:

well blizz delete some of the bugged items on west.. (bugged sojs (the ar one type) sigon shields. bugged peasant (war hats) but still "iths" still around... but somehow some of then got deleted...(lost a Hydra ith bow) <--- this is actually good...for economy..... but there are still bugged lightning absorb rings... bugged absorb circlets... bugged Amazon sojz (the one with 45 to min(i got specimens) and the bugged Oculus sojs (both sojs rings has not negative stats same as circlets).