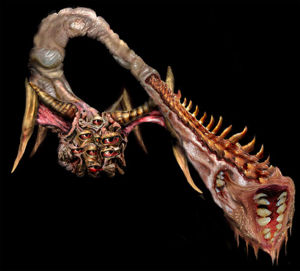 The Reziarfg is an Easter Egg feature on Blizzard's Arreat Summit.

Spawned from the very bowels of the skulking Stygian Beast who awakens only once every 1000 years to feed off the spawn of its own bile and pus, the Reziarfg is truly the most hideous and vile monster in all of the Three’s bestiary. It was once said that the Three did not always rule the darkness that beasts beyond thought swelled and slithered across the void. It is believed that some of these nightmares may still exist hidden deep with in the pitch of the abyss where even the darkness of the upper realms of hell seems like day. This is where Reziarfg lives.

This monster is an inside joke by the Blizzard web team. The long time bliz webmaster's name is Geoff Fraizer, and going by the usual Blizzard first initial, last name format, spelled backwards, that's...

The monster does not appear in the game or the game stats; it's just a joke on Blizzard's Diablo II website. There's never been any confirmation about where the rather ugly concept art/render came from. Perhaps an abandoned monster from some other Blizzard title?