The Matrix Hack was in common use in early 2002. It was an actual hack; a way to break the game code to do all sorts of bad things, including causing permanent character corruption, duping, and trade item stealing. The most publicly-visible result of the hack was the creation of the so called "Ith" items, since that name remained on the item after the runeword was broken (even if Ith wasn't in the runeword). These were super-powerful items, ones with runeword bonuses and empty sockets. This hack has long since been fixed, but matrix'ed items, and dupes of them, can still be found on the realms, even years later.

The information on this page comes from the Warnings section, and was written back in 2002, when this hack was in common use.

We've gotten a bunch of reports of this one, but emails in early February say that it has in fact been fixed by Blizzard, since a couple of the discoverers of it helped them to see how it was done and to shut down the exploit that enabled it. This hack would have been doom to realm play, since it enabled permanent character corruption via a trade hacking technique, enabled stealing of items from other characters through the trade window, duping, and it was how people were making those ex-runeword items, since with it you could make a Runeword, then strip out the Runes and resocket the holes, while keeping the bonuses from the Runeword on the item.

The hackers who discovered this technique made a nice profit selling these items on Ebay before the method was fixed, and there are many ex-runeword auctions ongoing now, items that were made before this hack was fixed. But the hacked Runewords are just a minor problem, compared to the character corruption, realm crashing and other disastrous problems that we'd have had if this hack had gone mainstream. 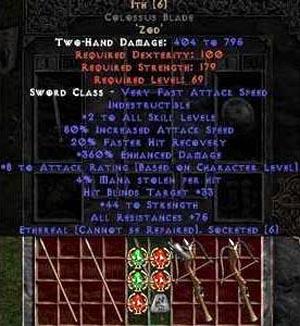 How does this work? Several emails have asked why these ex-Runeword hacked items don't have the full bonuses of their Runewords. Silence should have 30% MF and 11% mana leech, among other bonuses, for example. The reason is not anything weird with the hack, it's just how Runewords work. In making one, you get the properties of the actual runes, added to the special bonus of the Runeword. In these hacked ones the individual rune properties are removed, leaving just the bonuses, which are then added to the various jewels and runes that are socketed.

The Silence Runeword, with Rune properties in bold.

The hack removes these runes and their bonuses, which leaves you with an item that has:

Most of these items we've seen have been Ethereal, so they all have a Zod in them to make them indestructible, often an Ohm for 50% damage, and then 5 jewels, whatever the best duped ones were, mostly 40% Dmg/15% IAS jewels, or even bugged jewels with mega bonuses. A common bugged/duped one has +8 AR per Clvl and +44 Str, and you can see those properties on the Silence pictured above.

Bugged Jewel on a Clvl 95 character.

So these ex-runewords are usually duped ethereal socketed items, made into Runewords with duped runes, hacked to remove the Runes but keep the Runeword bonus, and then re-socketed with various godly duped Jewels and duped uber-rare Runes. It's hard to imagine a more cheated item, eh?

The fact that this has been fixed is not confirmed, but it's been posted about on hacking forums as being fixed, so hopefully that is the case. Again, we're trying to get some comment from Blizzard about it, but you know how they are about communicating with the community, so don't hold your breath.