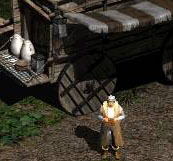 Good day to you partner! I'm Gheed and I can already tell that I'll be your best friend in this forsaken camp. A spare weapon, some gold, a small gem is all I want in exchange for the equipment you'll need on whatever quests you might undertake. Now, now, now... Don't be shy, all of my items are guaranteed for life and come with a two-day warranty!

A Necromancer! I hoped I'd never have to lay my eyes on one of your kind again. ... The recent troubles in this area have brought out all kinds, I see. Nevertheless, your money's good... A spare weapon, some gold, a small gem is all I want in exchange for the equipment you'll need on whatever quests you might undertake! Now, now, now... Don't be shy, all of my items are guaranteed for life and come with a two-day warranty!

The only good demon is a dead one, I say. By the way, did you happen to find anything in that cave you'd like to sell?

Tools of the Trade

Charsi talks of nothing anymore, but this Horadric Malus. Between you and her my ears need a rest. Just find it and bring it back quickly. I have offered my nomadic phallus, but to no avail.

I have heard that you bear us no Malus.

Sisters to the Slaughter

You're going after Andariel? ... One of my wagon wheels is in need of repair. I'll be under the wagon, if I'm needed.