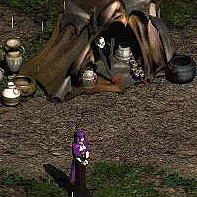 The Rogue Encampment was set up by The Sisterhood of the Sightless Eye after Andariel invaded their Monastery and killed many of their order. Akara describes it as a camp with "rickety walls" and it's merely a small defence against the horrible monsters outside it's walls. It's the town level of Act I.

All new characters find themselves in the Rogue Encampment built by former inhabitants of the great Rogue Monastery. Shortly after a Dark Wanderer crossed the Monastery Gate, foul creatures began to appear throughout the wilderness, and many of the ancient Sisterhood known as the Sightless Eye began to fall under a dark spell. The few who have successfully fled from the Monastery made camp here while a number of remaining Rogues continually stand guard near the entrance to this camp.

All new arrivals are immediately greeted by Warriv who mentions the tragedy of Tristram and the appearance of this Dark Wanderer headed eastward towards the Monastery.

Including Warriv, you will find five(six) NPCs here who will aid you throughout your time here: 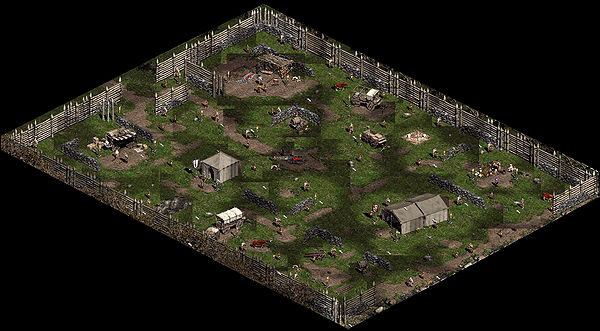 The Sisterhood of the Sightless Eye's encampment.

All towns contain a Waypoint for quick access to other areas with an activated node. The waypoint of the Rogue Encampment is always located on the northeastern wall, straight east of the camp fire where Warriv and Kashya is (and the Town Portal centre) and relatively close northwest of Akara.

These are the six quests in the Rogue Encampment: