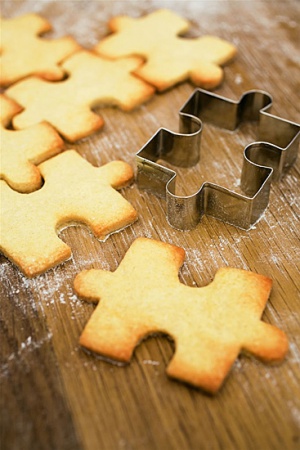 Cookie Cutter is a term that refers to a character build that's repeatedly created in exact form, like cookies stamped out in exactly the same shape. It's usually used derisively, as an insult towards players who simply imitate others, without putting any originality or variety into their character.

Cookie cutter builds are almost always very powerful -- obviously -- that's why other players are duplicating the build. Because it works! Skill distribution is almost always the same, and while there will always be some differences in equipment, the ultimate equipment goals are generally identical.

There have been numerous cookie cutter builds throughout the history of Diablo II, and they're found in every RPG. One of the first and most popular such builds in Diablo 2 was the Whirlwind Barbarian, usually using a sword. The lance-using Barbarian became the most popular once that item was un-bugged and became findable.

In v1.09 Diablo 2, the Burizon, an Amazon using Guided Arrow with the the Buriza-Do Kanyon Unique Ballista was enormously popular.