Details: Whirlwind is the Tasmanian Devil of Barbarian skills, turning the character into a spinning death-dealer, capable of passing through huge mobs and hitting dozens of targets with a single use of the skill. There are dangers as well, and a great many details to grasp in order to use this skill expertly. 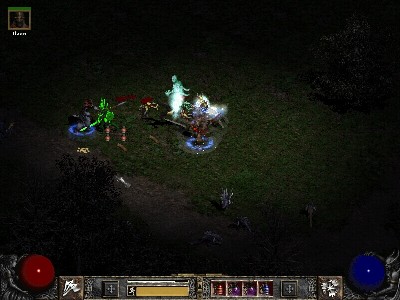 Synergies: None
Lore: Of the Barbarian people, the Tribe of Thunder was the first to draw upon the primal forces of the weather. Tornadoes would ravage their plains as summer turned to the harvest season. The shaman of the tribe would interpret the tornadoes as an omen of evil during times of peace, and as a harbinger of great victory during wartime. Observing the strength of the whirlwind, these Barbarians learned to emulate the swirling mיlange of the cyclone in their attacks. As time went on and the tribes intermingled, the ability to attack in the manner of the whirlwind was passed down to all of the Barbarian people.

When using this skill, the Barbarian will spin in a straight line, to the point you target, unless the path is blocked by walls, chests, rocks, or other obstacles.

Potions may not be drunk while in-mid spin, so be cautious starting a Whirlwind without full health.

If you target a monster, the Barbarian will spin until he hits that monster. If the monster runs or flies away or teleports, the Barbarian can spin for a very long time, until he runs into an obstacle. This is not advised. Death can be avoided

Multiple spins can be performed in a row if you keep the mouse button depressed. When aiming this way, individual monsters will not be highlighted or targeted, so you can spin to exact points, regardless of what's between you and your destination.

Extremely fast foot speed can be a detriment with Whirlwind, since you might move too far per spin, while landing too few hit checks. In earlier versions of D2, being very slow, or even chilled, was a nice bonus when using Whirlwind, since Barbarian's movement speed was slowed, but his weapon hit just as quickly as usual. It was a lot of fun to spin to the edge of the screen while monsters walked along almost on top of the Barbarian, taking dozens of hits.

Dual Wielding. The hit-check alternates between the weapons, producing an overall result of damage about equal to the average of the two weapons. If one weapon is slower, the frame rate will be adversely effected, so it's best to use two weapons with the same frame break (see below), or else just go with a single weapon.

The concept of "frame breaks" are essential to understand when using Whirlwind. Diablo II runs at 25 frames per second. You may not see this many frames if your computer or net connection is slow, but the game will process its calculations at this speed regardless of your apparent FPS. Since the FPS is how things are calculated in Diablo II, functions such as weapon speed, spell casting speed, stun length, and more are counted in frames. If an effect is said to last for 2 seconds, that means it lasts for 50 frames.

Since weapons swing much faster than once a second, their speed is expressed in frames. A base weapon, on a given character, might swing in 9 frames. That means every 9 frames, your character will swing it once. Adding IAS (Increased Attack Speed) via magical modifiers or socketed jewels/Shael Runes, from your character's other equipment, via the Fanaticism Aura, etc, will increase the swing speed. Break points are a way of expressing how much IAS a character needs to swing one frame faster. For our hypothetical example of a 9 frame swing rate, 10 IAS might get it down to 8 frames, 40 IAS to 7 frames, 95 IAS to 6 frames, and so on. If you added 40 IAS, you'd swing at 7 frames, and would continue swinging at 7 frames until you met or exceeded 95 IAS. It's usually easy to speed most weapons by 2 or 3 frames. Each frame above that often requires an enormous amount of IAS, so much that a character must devote practically all of their equipment to boosting that modifier.

Many skills increase (or sometimes decrease) swing speed, and the frame rate boost (or penalty) of the skill must be factored into the other properties affecting your character's swing speed.

The quirk with Whirlwind, since the skill was reworked in v1.07 and then more substantially in v1.09, is that the frequency of hit checks while performing a Whirlwind stems from the Barbarian's weapon alone. IAS bonuses on other equipment, or even from Fanaticism, do not boost the number of hit checks in Whirlwind.

Every weapon gets two quick checks, at 4 and 8 frames after the Whirlwind begins. Hitting at 4 frames is exceptionally fast, faster than almost any other attack in the game, and so Whirlwind is worth using with any weapon, providing you use the skill correctly, by making lots of short spins. If you click way across the screen and start spinning with a slow weapon, you'll hit twice, quickly, and then quite slowly thereafter, while the monsters you are passing over will be pounding you mercilessly. On the other hand, if you have a very fast weapon, longer spins can work quite nicely. Also keep in mind that these are not guaranteed hits; your Barbarian's to/hit rating is checked, just as with any other attack.

Note: All swords are treated as one-handed weapons when calculating Whirlwind, whether the Barbarian has the weapon equipped in one or two handed mode. The above calculation for Grandfather therefore holds for any way the sword is held.

Take advantage of the two quick hits with every Whirlwind, and make lots of short, quick spins, especially if you have a slower weapon.

The "dance of death." Target a spot just on the other side of a nearby monster. Once the Barbarian starts spinning, keep the mouse button depressed and move the cursor to your next targeted spot, just a couple of yards away from the first spot. Repeat this time and again, moving over the same monster repeatedly, often in square or triangle shapes. This technique is the best way to deal with a single target, such as a boss monster, and it fully exploits the two quick hits every use of Whirlwind grants.

Since monsters pursue the moving Barbarian, spinning across the leading edge of a mob is a good strategy. Make the monsters walk after you and they'll often stay right in the kill zone of the Whirlwind. Concentrate your hits on a few monsters, rather than gaily spinning through the middle of huge mob; multiple hits on half a dozen monsters will kill them, while a hit or two on twenty monsters will just make them angry.

Playing on the realms the exact location of the monster is never clear, with lag and desynch, so you can't be entirely precise. It's good to run up and Bash or Berserk the target one time, to get an exact fix on the location before you start spinning around it.

On very difficult packs, especially if there is a boss monster with Mana Burn, you want to do longer spins. You can't be interrupted mid-spin, but you can be swarmed when you stop, and hit too fast to start another one. Barbs can take tremendous damage while they are spinning, but get it all back with leech, as long as they keep hitting. This works with Mana Burn as well, you can be hit and mana burned to nothing, and refill the mana bulb with the next few hits as the spin continues. A single Mana Burn boss can be more trouble than a mob, and it can be easier to stand still and kill it with Bash, Stun, or Berzerk.

In early versions of Diablo II, the Barbarian was virtually invulnerable while in mid-Whirlwind, and could hit many more times per Whirlwind than is now possible. Unlike in those early days, this skill must be now used with some caution and forethought.

Whirlwind has a heavy mana cost, so be sure your damage and % leech are sufficient to refill the mana bulb on each spin.

Long Weapons such as Spears, and Polearms make Whirlwind even more effective as it will hit monsters in a wider radius.

Whirlwind does not work with: "On Attack", "On Striking", or "When You Kill an Enemy" item properties.