Median XL is a popular Diablo 2 mod authored by Brother Laz. It is a massive piece of work that even Blizzard has praised[1]. It's an entirely alternate gameplay of Diablo II.

Median XL's creator, Brother Laz first started modding in Patch 1.09. He released his first mod, Inferno (download) under the name "Myokai", and was in hindsight regretting publishing his first mod, as he felt it was so bad, looking back.

His first real set of followers he got under his own name was from making the Demon Trip mods. They were the first mods to replace character animations and the first mods to feature new skill trees. These mods were in Laz's own opinion sloppily coded, but as time passed and he felt he grew mentally he wanted to do better.

The video here is an example of Barbarian gameplay in Median: 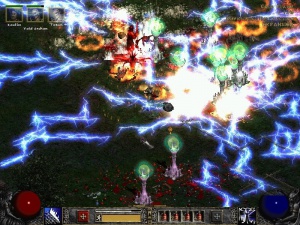 In 2003, when Patch 1.10 was still in beta, he worked for two months full-time to create the mod called Median. It had a skill system similar to Diablo I, where skill books were used to learn new skills. Unfortunately, a massive bug appeared. Somewhere in Act II, characters got corrupted, and he could not find the cause, thus scrapping the mod.

In early 2005, development on Median 2 started, using the files from the first Median as a base. The development took about two or three weeks (spread over a long time) and became a hit among fans. After a couple of months, Laz wanted to fix some issues with Median 2 but was unable to because the fixes would corrupt existing characters. He took the opportunity to add new content and replace some of the existing unbalanced content, creating "Median 2 Special Edition", released in December 2005.

In December 2007, Brother Laz released Median 2008, wich enhanced his series of mod to an even higher standard with more features and more fun. The median mods started looking less and less like a mod, and more and more like a Diabloish game on its own.

The sequel to Median 2008 was released in October 2008 together with a new website. Median XL was the new name, and the mod that has been continuously updated since then.

The mod changes many variables in the game including class skills, player mechanics, monsters, levels, items among other things.

Median is popular and technically proficient enough that it was commented on by some of the Diablo 3 designers during an interview at Blizzcon 2009. [2]

GamePlanet: Have you guys ever played any of the mods that you get for Diablo II, the likes of the Median XL mod? Have you heard of that?
Kevin Martens: Oh yeah, I played that like crazy! I love it!

GamePlanet: So have you taken any sort of inspiration from some of the changes he has made at all?
Kevin Martens: You bet! It kinda hit us a few months back, people started playing a lot of it and brought it in and we took a look at it. There's some things that people have done with that game that I think are exemplary. He's done an awesome job actually of monster placement and creating combat scenarios where monsters tend to 'bleed in' from the outside, and take a combat situation that at first seemed like it was something you could handle, and then suddenly grows into something that is way out of hand! And it creates these really awesome moments. He came up with some really novel monster abilities and skills and stuff. It's a terrific example of a mod.

A lot of people will look at Diablo changes that we make sometimes and say "if you do that you'll ruin the game!", and then here's an example of somebody who's changed almost everything about Diablo II, but somehow preserved the game, you know, it still feels a lot like Diablo II! Even though lots of things have changed, including the health system -- things that are like, totally taboo, don't change that or it's over! And yet they did it. So that's a terrific example of exactly the kinds of forward thinking that we like. I don't know how he got half that stuff in there! In fact I went back and I asked one of the original artists on the game, how did he do that?! And they were like, I don't know! (laughs)

From the official Median site:

Welcome to the Median XL wiki


A Diablo 2: Lord of Destruction mod, created by Brother Laz

What is Median XL?

What is a mod?

While it changes aspects of the game, a mod is not a cheat - cheats aim to make the player's life easier while keeping the game intact. A mod changes the game itself, and generally speaking one of the main aims of a mod is usually to make the game harder. The changes may be very minor and insignificant (e.g. changing caps to look like afros), or major (e.g. giving monsters new skills).

Median XL is a mod which makes extensive changes to many features of the game, including the character classes, monsters, and items. The information in this section of the wiki regarding the mod applies only to the mod, and not to the original game. In case you were actually looking for information on the original game, click here to return to the Diablo 2 wiki main page.

What is this Median XL wiki about?

What you'll find here is an introduction to the Median XL mod for new players who just heard of but know nothing about it. What does this mod do? and Where do I start? are common questions which will be addressed with brief, to-the-point summaries. Some things will be deliberately left out in the interests of keeping the articles short to avoid overwhelming people with information.

What you won't find here is a listing for every single new monster, item, cube recipe, or quest. That's what the official website is for. Once you are a little familiar with the mod, head there to get the scoop on everything.

Q: What do I need to get the mod running? Does it work with other mods and stuff?
A: Technical Requirements and basic FAQ

Q: What exactly is the mod about? What does it change?
A: What is Median XL?

Q: So what kind of characters are available, and what can they do?
A: Classes and Skills

Q: I like socketing stuff. Tell me what the mod has.
A: Gems and Runes

Q: Interesting. Does this mean I get to do more things with the cube?
A: Horadric Cube Recipes

Q: Great, last question. How are the mercenaries?
A: Mercenaries

Q: I've read the stuff here, I want to know more.
A: Check out the Less Frequently Asked Questions thread, which is located on the official forums. The direct link to it is http://modsbylaz.14.forumer.com/viewtopic.php?t=7291 . For the link to the mod's official website, see the top of this article.