A mod refers to a a modified version of a game, usually a player-made version of the game with various added features or gameplay changes. Such games are generally referred to as "mods." See the wikipedia modding page for useful background info about modding computer games.

There is a long history of modding the games in the Diablo series, with Diablo 1, Hellfire, Diablo 2, and Diablo 2: Lord of Destruction all having been the subject of numerous high-quality player-made mods.

Modders have been somewhat limited when working on the Diablo games since the sprite-based graphics are very difficult to modify or augment. Clever modders have found ways to modify existing graphics, and even add new ones (there are countless new spell graphics in the Median mod), but this is a much more complicated process than re-skinning characters or creating new levels in most 3D games. As such all Diablo mods still use virtually all of the original character and monster graphics/animations. Modders may be able to remake Diablo 3 in much grander fashion, when that time comes.

The Diablo 3 team has consistently stated that there are no plans to support modding in Diablo 3. (There was virtually no mod support in Diablo or Diablo 2 either, until the v1.10 patch made modding the game considerably easier, and fans persevered nevertheless. It's assumed we'll see similar efforts made on Diablo 3.)

See the Mods page in the Diablo 3 wiki for more details and official statements.

This video below and the image to the right are examples of a Diablo II mod in action: Median XL by Brother Laz. 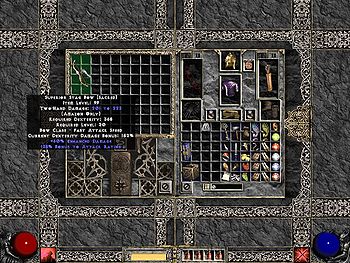 Improved inventory is one advantage with playing a mod.

No mods for Diablo or Diablo 2 are playable over Battle.net. While some mods are single player only, most are fully functional with multiplayer, and all active mods have forums where users can meet up to arrange TCP/IP or LAN play sessions.

The multiplayer functionality of future, hypothetical Diablo 3 mods is in question, since Blizzard is unlikely to support TCP/IP play with their future titles. (Starcraft 2 will not.) Programmers in the community will likely work to crack this feature and enable online play without connecting to Battle.net. If/when this is managed, mod makers will surely take advantage of it.

The first Diablo 1 mod to gain widespread popularity was made by Varaya and Khan, two German Diablo fans who created their own upgraded version of the game. They soon took their modding skills further by creating a partial conversion, giving Diablo a Middle Earth theme, with numerous items, monsters, and locations inspired by Tolkien's Lord of the Rings series. This mod was expanded upon and updated numerous times once Hellfire was released.

The V&K mods are no longer maintained or updated, but playable versions can still be found and downloaded. See this forum thread for more details.

The Hell is another Diablo/Hellfire mod that adds greatly to the original gameplay experience. It's much more difficult than standard Hellfire, reworks the items and monsters entirely, and greatly changes the character balance. The mod remains under active development.

There have been dozens of Diablo 2 mods over the years, most of which are no longer active and will not work with the current game version. The older ones can still be played, but you must generally reinstall Diablo 2 and only patch up to the point that the mod supports.

The Phrozen Keep, though now largely inactive, was once the leading D2 mod resource, hosting dozens of mods in the early 00's. Archival information and links to older, inactive mods can still be found there. 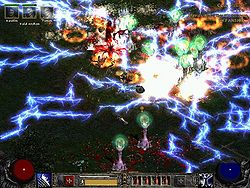 Median XL is the best known and most popular Diablo 2 mod. It's still under development and is regularly updated by Brother Laz with new content. Median virtually remakes Diablo 2, changing every character and skill, and making countless changes to the quests, monsters, items, and more. See the Median page in this wiki for more details.

The Plug Y mod is largely a utility to enable single player an infinite stash. It also enables the Realm-only end game quests, enabling single player characters to fight Uber Diablo and complete the events of the Pandemonium Event.

The Eastern Sun mod is a total conversion that gives Diablo 2 a Japanese flavor. Everything in the game is modified, with all new items, monsters, runes, and many other major changes. This mod was last updated in early 2008, and is not compatible with v1.12+ of Diablo 2. You must be running v1.10, v1.11 or v1.11b to play this mod, unless/until an updated version is released.

Since Diablo III is not released yet, there's naturally no mods for the game yet. However, there's plenty of information about Blizzard's plans for plans in the main Diablo Wiki:

Brother Laz is a major personality within the Diablo II modding scene, and he has a few tips for people wanting to make mods:

1/ Start small. Don't attempt a total conversion as your first mod. You'll just give up when you're making no progress.

2/ Never release your first mod. You'll end up getting no downloads and quitting the mod business. I did release my first mod, and counted my lucky stars I released it under a different nickname 'just in case'. Look for D2 Inferno by Myokai to see why.

3/ Use the file guides, the tutorials and the forum search at d2mods.com. You can learn so many things without having to post anything at all.

4/ Make sure you actually have the time to complete a mod. If your mod ends up cancelled due to lack of time, all the time you already invested in it is lost.