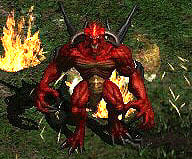 Uber Diablo in the flesh.

Uber Diablo is a Demon and a SuperUnique. He is also known as the Diablo Clone.

Uber Diablo is a special event boss that was added to the game in v1.10. He can only spawn on the realms, and appears after a given number of Stone of Jordan unique rings have been sold on that particular server.

When Uber Diablo spawns in a game the message "Evil Walks the Earth" appears. Uber Diablo should appear in place of the next SuperUnique to spawn, though this can be tricky to determine in a large game with multiple players in multiple locations. He is substantially more powerful than the Diablo you face at the end of Act Four, with far more hit points, higher resistances, and the ability to deal out a lot more damage. He can also use a special version of the Druid's Armageddon spell, which causes fireballs down all around him.

Uber Diablo drops only one item, the Unique Annihilus Charm. He is the only monster in the game that can drop this item.

Uber Diablo's stats are all preset. He does not get any random Monster Modifiers.

Uber Diablo uses a variety of spells to supplement his melee strikes. Several of these hit for physical + elemental damage, making physical resistance extremely important for characters who wish to survive this battle.

Uber Diablo regenerates hit points, a rare talent for a SuperUnique. His regeneration rate is the standard 1.2%/sec, but it seems very fast since he has such a vast reservoir of hit points. 1.2% of 642,700 = 7712.4 per second. In other words, Uber Diablo regenerates more hit points every second than most Hell difficult monsters have in total, and with his blocking and huge resistances, the comparison is even more skewed.