The Pandemonium Fortress is the Heaven's ancient staging ground for incursions into the Hell. It's the town level of Act IV. 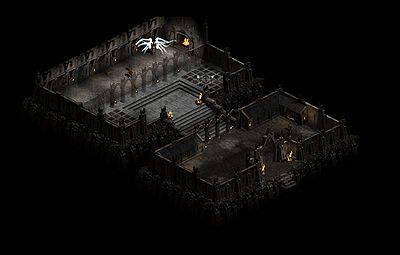 The overlay of the Pandemonium Fortress.

A place of great power and mystery, the Fortress is Heaven's ancient staging ground for incursions and invasions into the Hell. Standing as the last bastion of the Light before the Gates of the Burning Hells, this place has been hallowed by the blood of thousands of champions, mortal and Angel alike.

Comprised of a small antechamber, a sanctified Waypoint and a plateau where trades can be made, it is miraculous that the structure could stand against the corrupting powers of Hell.

While it seems strange that Halbu and Jamella - often called the Merchants of Light - would engage in matters as trivial as the buying and selling of armor and weapons, it makes a certain sense in the scope of how the agents of Heaven are allowed to interact with those of the mortal realm. Like Tyrael, they are forbidden to aid brave adventurers directly, but their buying and selling of items is indirect help at best, allowing them to follow the letter of their Holy Law.

Not much is known about the Pandemonium Fortress history period, and there were no direct threats to the Fortress during the time the hero travelled into Hell and defeated Diablo.

Tyrael in the Fortress.

As a small fortress, seemingly forgotten by the forces of Hell, there are just a few NPCs here:

All towns contain a Waypoint for quick access to other areas with an activated node. The Waypoint of the Pandemonium Fortress is located on the top platform, close by to Tyrael just below him to the right.

These are the three quests in the Pandemonium Fortress: