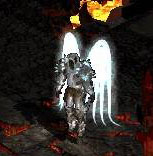 Hadriel is an NPC angel seen in Act Four. Hadriel is found in the River of Flame, just north of the waypoint, at the edge of the causeway separating the River of Flame from the Chaos Sanctuary. He does not battle against the monsters, as Flavie does in Act One, and is ignored by them in turn. Also unlike Tyrael and Izual, he keeps his wings tucked in a lot closer to his body.

Proceed, hero, into Terror's lair.
Know that Diablo's innermost sanctum is hidden by five seals.
Only by opening each of these seals can you clear your way to the final battle.

Interestingly, Hadriel will not share in party-friendly auras, but he will gain the effect of party sharing Warcries. Not that they do anything for him, since he has no more importance on the action than a statue.

Speaking of statues, the double row of them between Hadriel and the waypoint are a nice Easter Egg; their heads turn to watch as your character runs past on the way to the final battle with Diablo.