Act IV - The Harrowing - is the last act of Diablo II (with a fifth added in the expansion) where you follow Diablo to the Pandemonium Fortress on the outskirts of Hell to prevent him from ever returning to Sanctuary. 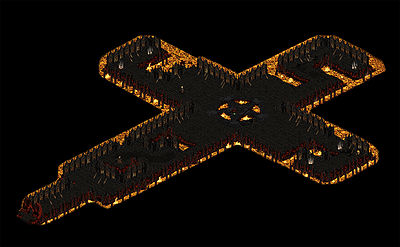 The full layout of Diablo's lair: The Chaos Sanctuary. 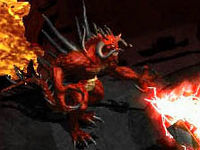 Having finished off Mephisto, the hero enters the portal to Hell and finds himself in the Pandemonium Fortress, the "town" area of Act IV.

Deckard Cain welcomes the player "to the Last Bastion of Light" in the Burning Hells and asks the hero to talk to Tyrael. He is asked to travel to the plains of Hell and destroy the Demonic Vessel holding Izual, which will free the Angel.

When freed, Izual informs the player that it was he who told the Prime Evils of the Soulstones' power and that the demons had been behind this immense plan to gain the power of the stones. With this information, Deckard Cain urges the player to destroy Mephisto's Soulstone at the Hellforge. The Forge is guarded by Hephasto, the Armorer of Hell, and the player has to kill him to destroy the Soulstone.

With nothing else in the path of defeating Diablo, Tyrael asks the player to meet up with Hadriel, another Angel, who has been observing the Chaos Sanctuary: Diablo's domain. He has concluded that Diablo, although his big mean red self, has not reached his maximum potential after possessing the Dark Wanderer. In fact, the transformation has left him weak.

The player sets out to defeat Diablo's three generals to open the five seals protecting Diablo. Then battles the Lord of Terror, defeating him and destroying his Soulstone on the Hellforge.

Diablo II ends here, but with the expansion, the hero is then hurried off to Harrogath in Act V by Tyrael to stop Baal from reaching the Worldstone.

The fourth Act by far the shortest one in the game, both in terms of actual levels as well as the mileage you have to run to get to the end. The layout comes in either the big squares of the Outer Steppes, and the long walkways in the River of Flames.

Tyrael in the Pandemonium Fortress.

As with the number of levels, Act IV has the least NPCs. Most of them are found in the Pandemonium Fortress, but a more than usual amount is found in the dangerous levels: Izual and Hadriel.

Just as with the number of levels and NPCs, Act IV also has the least quests. It's in fact the only act with only three as opposed to six.

They are all directly related to the story. Without defeating Izual, you won't learn about the dangers of the Soulstones, without destroying them on the Hellforge, the Prime Evils are free to use and abuse their power and without killing Diablo in his weakened state, you're basically screwed.

Half of the levels in Act IV holds a Waypoint.