Difference between revisions of "Portals"

Portals are found in red and blue varieties, but they have the same function. Each type instantly transports a character from the portal to a remote location.

Blue portals are most often Town Portals, cast by characters from town portal scrolls or books. These must be purchased or scrounged up from monster drops; the skill can not be learned in Diablo II as it could in Diablo. Blue portals are also created by Portal Shrines.

Red portals are special types of portals that transport characters somewhere other than town. They are usually cast by NPCs or found at pre-existing transportation points. A complete listing of these can be found further down this page.

Casting a town portal instantly opens a portal to the town in that act. Each town has an area where the portals appear, and it's possible to tell the portals apart since the hover text on each says where they go, and which character cast them. This is not the case in single player games, and if a character casts a portal on the same level as a Portal Shrine was activated on, there is no way to tell which portal is which. Portals created by Portal Shrines remain open for the duration of that game, no matter how often they are used.

Returning to the dungeon through a town portal cast by your character will immediately close that portal. Casting a new town portal will close the previous portal cast by that character, if it remains open. (Even if that previous portal was in another act.) A character who goes hostile will see their portal close instantly. Even though hostile characters can not move through portals, they can see who cast them and where they are; keep this in mind if you are in the dungeon and there is a hostile player in town; your portal will give away your location, and if you are near a waypoint, this can be a dangerous problem.

Only the character who cast a portal, or other characters in her party, can use her portal. Since portals only close when their caster uses them to return to the dungeons from town, other players in a party can make an infinite number of trips to and from town through another character's portal. Be careful not to remain in town when the character who cast the portal returns, or their portal will vanish and you will have no way to get back to the battle (short of asking one of the characters there for a portal.)

It's wise to cast a portal in some safe location near the site of a major boss battle, if you think you or others in your party might die. Running back to Diablo all along the River of Fire causeway, or down to Baal from the Worldstone Keep level 2 is no fun at all, especially if you didn't clear those levels the first time, and it's impossible to kill the monsters blocking your path back to your corpse.

Town portals are useful ways to escape trouble, whether from monsters or from other characters. Bear in mind that town portals are not Recall spells, as seen in some games. Your character must have space and time to cast the spell, and then be able to walk through it. This may be impossible in a hurry, or when mobbed by enemies.

Use town portals to save time while exploring areas. If you're looking for a waypoint, and you find the stairs to the next level first, or to some dungeon area (such as the Maggot Lair), cast a portal by the stairs, continue looking for the waypoint, and when you find it take it to town, then return through your portal. Don't forget you've got a shortcut portal waiting and cast another one in some distant corner of the level, though.

This technique can be expanded upon when playing in parties; one character can cast a portal somewhere, such as at the entrance to the Frozen River, and then once the level is cleared and Anya is rescued, a second player can cast the portal to return to town, before everyone goes back through the first portal to resume exploring the Crystalline Passage.

After v1.09, portals can not be used to skip to areas late in a quest, if this will take a character past one of the "blocking quests." This feature was added to make rushing low level characters through the game a bit more difficult, so it's no longer possible to simply arrive in Lut Gholein, take a friend's portal to the Canyon of the Magi, and tag along while they find the true tomb and kill Duriel for you in 3 minutes.

Levels that can not be portaled to until the previous, required quests have been completed include:

Red portals work just the same as blue ones, transporting characters who walk through them to different locations. These are usually found in the dungeons in a few set places, or created by NPCs. They never take a character back to town, and instead bridge different locations. Anya casts one to let players persue Pindleskin. Tyrael casts one for players to exit the game through once Baal has been defeated. And so forth.

A complete list of these can be found below.

A complete listing of all the special portals in the game, red or blue. Not included are Portal Shrines, which can appear on nearly every level. 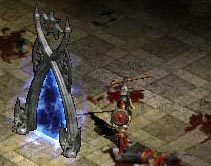 To the Arcane Sanctuary 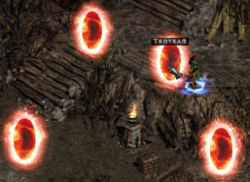 There are four red portals opened as part of the Pandemonium Event quest, which can only be engaged in on the realms, in v1.11. These each require one each of the three keys of Terror, Hate, and Destruction, and randomly open a portal to the Matron's Den, the Forgotten Sands, and the Furnace of Pain. Once all three have been entered and a single artifact obtained from the bosses found in each, these three artifacts can be transmuted to open a portal to Uber Tristram, site of the ultimate battle against Uber Baal, Uber Mephisto, and Pandemonium Diablo.
Retrieved from "http://diablo2.diablowiki.net/index.php?title=Portals&oldid=6066"
Category: