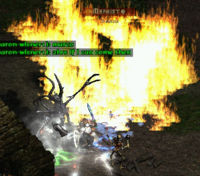 Uber Mephisto is found in Uber Tristram, alongside Uber Baal and Pandemonium Diablo, at the culmination of the Pandemonium Event. Say that three times fast.

Uber Mephisto looks like the regular Mephisto you face at the end of Act Three, but he is substantially boosted in all of his stats: hit points, defense, level, resistances, etc, and he possesses some new spells and behaviors as well; chiefly the ability to cast Blizzard, and a very high level Conviction aura that cuts elemental resistances by 125 percentage points.

With the exception of cursing him with Life Tap, it is impossible to steal life or mana from Uber Mephisto (Drain Effectiveness = 0), and he is always immune to Poison and Lightning. Uber Mephisto can also summon up minions, chiefly Skeleton Mages whose elemental attacks are greatly enhanced by Mephisto's massive Conviction Aura.