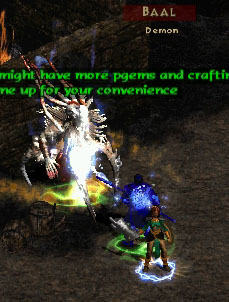 Uber Baal is found in Uber Tristram, the final area of the multi-stage Pandemonium Event. Uber Baal is substantially more powerful than the Baal you face at the end of Act Five. The uber version has much higher hit points, damage, resistances, and more. He also regenerates hit points at twice the usual rate. He does not possess any new spells, unlike the other uber monsters.