Lut Gholein, the Jewel of the Desert, is an ancient trading port on the western continent of Sanctuary, led by Jerhyn in the days of Diablo II. It's a very rich city that was unprepared for its demonic invasion. It's the town level of Act II.

Lut Gholein is the main trading port in Aranoch and the midpoint between the Western Kingdoms and Kehjistan in the East.

The city is significantly larger than what it appears to be in Diablo II, but is just resized so that players would not get lost or bored, or having too high system requirements.

Lut Gholein is visited by the player in Diablo II's Act II in order to catch up with the Dark Wanderer (Diablo) and to prevent him from freeing his brother, Baal.

Diablo does what he can to slow the pursuit, including corrupting local fauna to be more hostile and reanimating a mummified Horadric mage called Radament in the city sewers, something that in the end actually helps the hero by finding the Horadric Scroll.

The Summoner, the Sorcerer of Diablo I, takes control of the Arcane Sanctuary, releasing demons into the Palace and threatening the city. However, if this is his own mad handiwork, or if it happened through influence of Diablo is unknown.

Lut Gholein is full of a variety of NPCs that contribute with varying levels of helpfulness. 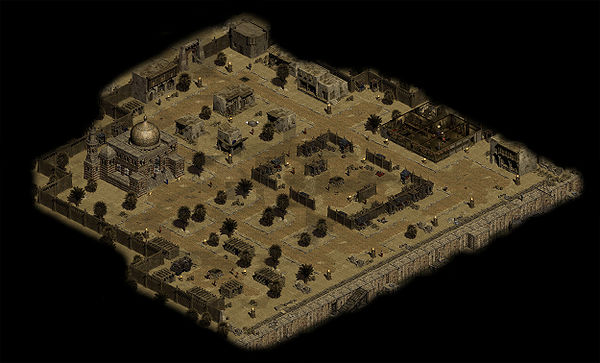 All towns contain a Waypoint for quick access to other areas with an activated node. The waypoint of Lut Gholein is always located in the northern part of the city, between some buildings. It's quite far away from the Town Portal centre, but not too far off from Fara, the healer and weapons merchant.

These are the six quests in Lut Gholein: