Kurast was the capital city of Kehjistan during the time of Diablo II, and the second largest city in the empire, after Caldeum. 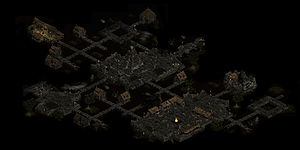 The small Kurast Docks are that has not been affected by the demonic corruption.

Most of Kurast was overrun by the "jungle-plague" created by the Prime Evils, or terrorised by the Zakarum priests who were under control by Mephisto. One of the parts of the city that were not overrun was the Kurast Docks, an area separated from the main city to handle trade by sea, where the player starts in the game.

When Mephisto's Compelling Orb was smashed and the Prime Evil killed, life went back to normal very quickly in Kurast, and 20 years later, people only speak of it as a freak series of events, like a riot or another minor upheaval in their lives.

[ v · e ] Kurast is so big it is represented in multiple levels in Diablo II, even though other great cities like Lut Gholein instead has been shrunken to a small town-sized area. This is how it is presented in D2: