Nihlathak's Temple is apart from other levels in Act V, and must be reached through a red portal opened by Anya from Harrogath. 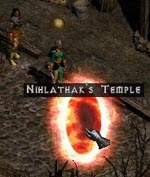 The red portal from Harrogath.

This is a very small level, which primarily is the cliff just outside of Nihlathak's abode, as well as a narrow passageway down to the Halls of Anguish. This level can only be reached through a red portal opened by Anya after rescuing her.

When you enter the portal and see the cliff, several Defiled Warrior's arise there, showing that Nihlathak indeed has sided with the Baal. Once those are taken care of, continue in to the temple and you find the famous Pindleskin.

Pindleskin and his minions are always in the narrow temple that leads to the entrance to the Halls of Anguish. Though his potential drops have been nerfed a bit since his v1.09 heyday when he could drop any item in the game, Pindleskin is still one of the most popular "item run" monsters available for his easy access and the fact that he can drop from very high treasure classes.

Pindleskin, along with all Reanimated Horde, got a substantially boost to the accuracy and damage of their charge attack in v1.10. This made him very dangerous to any character with less than 1000 hit points, especially when cursed.

Nihlathak's Temple is basically just one dungeon with levels, but instead of just being named "Level X", they have their own names: