Frigid Highlands is the second part of the siege-inspired levels outside Harrogath in Act V.

This is presumably the old fortifications made by the Barbarians when halting Baal's attack on the mountain. Now it's instead an obstacle for the player.

Here you need to rescue captured barbarians in the Rescue on Mount Arreat quest. This one is a little more involved than Stop the Siege. You must scour the Frigid Highlands and find fifteen captive Barbarian NPCs. They are held captive in wooden-fenced pens in groups of five, and when you find them you need merely knock the lock off the gate, and they will stream out and vanish into a portal that appears for them. 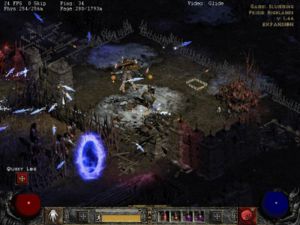 The three pens are always somewhere in the middle of the Frigid Highlands, not over by the sides of the area, and generally not visible on the mini map from the sides either, until you get close to them. The pens are easily spotted once you get near though, as large white rectangles. You'll always spot one on the minimap first and then close in on it, advancing slowly since there are monsters every step of the way in this area.

Considering the size of this map, this one usually requires some looking.

None of the Barbarian pens are guarded by any greater concentration of monsters than you find anywhere else in the fortified walls areas of Act V, so don't expect any massive dangerous battles. There are also at least 15 and probably more random wandering Barbarian NPCs around this area, but they are content to do their own thing and don't need rescuing.

When you return after freeing all 15 of the Barbarians, go to Qual-Kehk in Harrogath for your reward.

Somewhere on this level is also a portal back to a place in Hell, Abaddon to be precise, where you can clear out for more experience and treasure.