Nihlathak is an Animal.

Nihlathak is found at one corner of the four-pointed Halls of Vaught level, the third Halls level below Nihlathak's Temple, reached through a red portal by Anya in Harrogath. Nihlathak is a quest monster, and only by killing him can you finish the Betrayal of Harrogath quest. As the game plot reveals, Nihlathak is the Judas of the Barbarian tribe, a traitor to his people and a collaborator with evil who gave Baal access to Mount Arreat in exchange for temporarily sparing Harrogath his terrible wrath.

Battling Nihlathak is a unique experience. He is a summoner, and he presides over a vast mob of Minions and uses them as his weapons. He has no melee strikes at all, and only a chilling Arctic Blast spell for direct damage. The real danger comes from his use of the Necromancer's Corpse Explosion skill, which he uses to detonate the corpses of fallen monsters. These explosions deal substantial fire and physical damage, and prior to being considerably nerfed a bit in v1.09, Nihlathak was the single most dangerous monster in Act Five. Hardcore characters virtually never risked him, and only very high hit point builds, such as Druids teamed with Barbarians, felt safe risking his 1000+ damage Corpse Explosions. On the right hand side, you can see him being defeated by a Barbarian, using the frenzy attack. 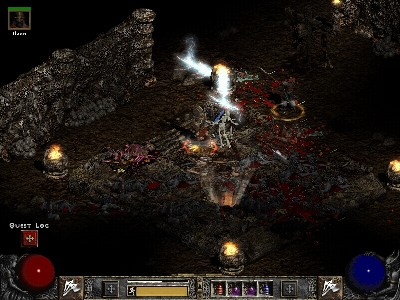 Skills that destroy corpses are helpful to employ around him, especially if they can be used from some distance, such as some of the Druid's Vines, or the Paladin's Redemption. Necromancers can have the most fun, fighting fire with fire by using their own Corpse Explosion skill. Items that grant "Slain Monsters Rest in Peace" such as the Nature's Peace Unique Ring, are also useful. Cold attacks can help by shattering the corpses, but the Ice Spawn that surround Nihlathak are immune to cold in Hell, so can not be shattered on that difficulty level.

Nihlathak can cast the following skills:

Nihlathak's stats are entirely preset, like an Act Boss'. He does not gain random modifiers on Nightmare or Hell.

Like all SuperUniques, Nihlathak does not regenerate hit points.

For my homeland!
I shall keep my end of Baal's bargain!
I will kill you!
You have no idea of the power you face!