The Palace is located inside Lut Gholein in Act II, and when you have completed enough quests, Jerhyn will give you access to his grand home. 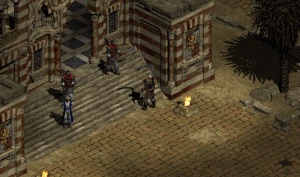 The entrance to the Palace is now open.

Just like Lut Gholein itself, the top part of the Palace is definitely bigger in "real life". It's made like a small temple in the game to be easy to get in to and down to the actual game content: The monsters!