This one is about as straight-forward as a quest can be; you just move down through the three levels of the Worldstone Keep, (there is a waypoint on level two) then through the Throne of Destruction level to a final room where you see Baal, but can't attack him yet.

Baal is up on a throne (hence the level name) here, and laughs constantly. Once you have killed all the Blood Lords and Stygian Furies in the immediate vicinity of the throne, the fun begins. He laughs and laughs (yes, it makes you want to kill him) and after a few seconds emits a glowing ball of yellow lightning. It flies up into the air and crashes down somewhere in front of the steps, and there appears a SuperUnique boss with his pack of minions.

Once you kill off that pack, their bodies vanish but leave a lot of blood, Baal laughs constantly, and then spawns another huge glowing orb which crashes down and releases a bunch of monsters. This happens five times, different and more powerful monsters each time, the first four being from Acts I to IV, and the fifth bunch being Minions of Destruction which are monsters seen nowhere else in the game.

Baal's Guardians, in order of appearance. Note that the packs appear in order of the acts of the game; Fallen are an Act One monster, Greater Mummies are from Act Two, and so on.

One major issue with these packs is the computer lag when they load. Early in the beta it was very bad, with several seconds of lag on your end as your computer loaded in the monster graphics. If you were right where they appeared, you could be killed before you were able to move at all. This was improved in v1.08, and the lag was backloaded, so it came up after each battle, when Baal was laughing and vanishing the corpses. After v1.09 the lag was largely removed, and these days, thanks to computers in 2008 being so much more powerful than they were in 2001 when the game was new, the lag in this area isn't an issue.

Baal's summoned monsters have to be removed from the throne area to bring up the next wave and eventually advance, however it isn't necessary to kill all or any of these special monsters, it is just that they have to be away from Baal's line of sight. A Sorceress can lure monsters away from Baal and then use Teleport to return to the throne area, where Baal will spawn the next batch of monsters. After unleashing his Minions of Destruction, Baal will leave after a while if the monsters have ran far enough away from the throne pursuing your character, so a Sorceress can Teleport back to the throne and enter the Worldstone Chamber.[1] This could be done in theory by other characters, however Ventar the Unholy and his Venom Lords are difficult to outrun. Usually, most characters will play out quest as the developers intended, eliminating each of Baal's champions to get to the Worldstone Chamber.

After you kill all the packs Baal laughs some more, then vanishes down the portal behind his throne. You follow him down and enter a small room with the enormous Worldstone looming in the middle of the area. It's very graphically impressive. Baal is less so, and dies very quickly if there is any Static Field in the area. He doesn't attack that quickly, but does have some interesting spell effects not seen anywhere else in the game, and can even duplicate himself.

Once Baal is down and his death animation, the orbiting spirits light show ends, Tyrael descends from overhead and hovers. And glows, and pontificates in his usual pompous fashion.

"I am impressed, mortal. You have overcome the greatest challenge this world has ever faced and defeated the last of the Prime Evils. However we are too late to save the Worldstone. Baal's destructive touch has corrupted it completely.

Given enough time, the Worldstone's energies will drain away and the barriers between the worlds will shatter -- the powers of Hell will flood into this...Sanctuary...and eradicate your people and everything you've labored to build.

Therefore I must destroy the corrupted Worldstone before the powers of Hell take root. This act will change your world forever -- with consequences even I cannot foresee. However it is the only way to ensure mankind's survival.

Go now, mortal. I have opened a portal that will lead you to safety.

May the Eternal Light shine upon you and your descendants for what you've done this day. The continued survival of mankind is your legacy. Above all else, you have earned a rest from the endless battle." 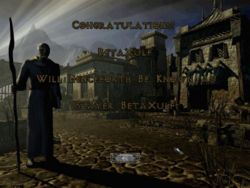 New Congratulations Render
Once Tyrael has delivered this rather unsettling message, he opens a red portal. The screen shakes and keeps shaking worse and worse, and chunks of crystal keep spinning by, moving up or down. When you click on the portal you pop to the new Congratulations screen, and after that view the final cinematic. In it Tyrael does indeed destroy the WorldStone, which is somewhat of a surprise. Many people suspected from the Act Five info during the beta (which did not include the new Cinematics) that it wasn't really Tyrael, and was instead a trick of Baal's, or by one of the other Lesser Evils, such as Belial, to get control of the Worldstone themselves. Apparently the game plot was much more straight-forward than some of us suspected.

If you've already killed Baal, Tyrael doesn't appear, and you don't get the red portal.

You are a worthy hero! We augment your skill and grant you entry to the interior of Mount Arreat, wherein lies the Worldstone.
Beware. You will not be alone. Baal the Lord of Destruction is already inside.
The Archangel Tyrael has always been our benefactor, but even he cannot help us now. For Baal blocks Tyrael's spiritual presence from entering the chamber of the Worldstone. Only you, mortal, have the power to defeat Baal now.
Baal threatens the Worldstone -- and through it, the mortal realm, itself. You must stop him before he gains full control of the sacred stone. With it under his control, Baal could shatter the boundaries between this world and the Burning Hells, thus allowing the hordes of the Prime Evils to pour forth into the mortal realm like an unstoppable tide!
If you are weak, the world as you know it could be lost forever. You must NOT fail!

Baal has blocked Tyrael from entering the Worldstone Chamber? This truly has become a battle against Hell.
Whether or not it was the Heavens' decree, this is your fight now -- your destiny.

Remember this. Baal once possessed Tal Rasha, one of the most powerful of the ancient Horadrim.
Your battles with Mephisto and Diablo will pale in comparison to your battle with Baal.
The Lord of Destruction aided by Tal Rasha's knowledge...The mountain itself will tremble when you clash.

I may be just an armorer, but I know this...Baal plans to destroy the world with the secrets contained in that mountain. It doesn't take a genius to know he has to be stopped.

You knew it would eventually come down to this. Kill Baal! Finish the game!

You have ventured to a place beyond legend. You rush to face an evil few can even imagine.
Be careful, my friend, and may the Light watch over you.

You have done the impossible, hero. Your defeat of the last of the three Prime Evils is a great victory for the Light.
Strange that you say that the Worldstone must be destroyed. The prophecies said nothing about that.
Perhaps all we have fought for will be lost...or perhaps we'll never need fight again!

I knew in time you would defeat Baal. You have done everything you set out to do, my friend.
Ever since you rescued me from Tristram, I have believed in you. It has been a supreme honor to aid you along the way.
So...The Worldstone was corrupted by Baal. And now Tyrael must destroy it. Worry not. Through whatever lies ahead I have faith that the Light will guide us both.
Go, now, back to the Worldstone chamber, and enter the portal Tyrael has opened for you.

The Ancients themselves will envy our songs about you.
Please, don't forget about us! Farewell, my friend.

If Tyrael says the Worldstone must be destroyed, then it must. We cannot let Baal's corruption prevail!
The world will change, true -- but who is to say it isn't for the better?

The destruction of the Worldstone does not bode well for our world. But I'll try not to worry...
After all, we have warriors like you fighting for us and for the Light.
Farewell!

I am impressed, mortal. You have overcome the greatest challenge this world has ever faced and defeated the last of the Prime Evils. However, we are too late to save the Worldstone. Baal's destructive touch has corrupted it completely.
Given enough time, the Worldstone's energies will drain away and the barriers between the worlds will shatter -- the powers of Hell will flood into this...Sanctuary...and eradicate your people and everything you've labored to build.
Therefore, I must destroy the corrupted Worldstone before the powers of Hell take root. This act will change your world forever -- with consequences even I cannot foresee. However, it is the only way to ensure mankind's survival.
Go now, mortal. I have opened a portal that will lead you to safety.
May the Eternal Light shine upon you and your descendants for what you've done this day. The continued survival of mankind is your legacy! Above all else, you have earned a rest from this endless battle.