The Blood Moor is the first wilderness area when you leave the Rogue Encampment. It contains one quest objective: the Den of Evil.

...To quote the Druid upon stepping out of the encampment and into the Blood Moor for the first time. 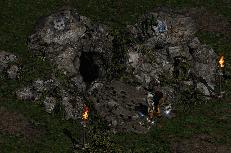 Entrance to the Den of Evil.

The Blood Moor is where every character's quest begins after consulting with Akara who mentions the rogues' discovery of a nearby cave filled with "shadowy creatures and horrors from beyond the grave." Monsters found in the Blood Moor do not post a serious threat and can be killed easily in normal difficulty. In nightmare and hell however, monsters are a significantly higher level and bosses can spawn providing more danger.

All characters should locate and clear out the Den of Evil before venturing further out beyond Flavie who guards the entrance to the Cold Plains.