ADVERTISEMENT
From Diablo Wiki
(Redirected from Stop the Siege)
Jump to: navigation, search

This first quest in the Act is about as straight-forward as a quest can be. You must find Shenk the Overseer, and kill him.

Quest One: Siege on Harrogath[edit]

When you first enter town, if you approach Larzuk the Blacksmith. He will have the "!" over his head, and if you click on him he gives you his introduction speech, and then offer the following:

"If you're here to defeat Baal, you must prove it!"

As we speak, Harrogath is under siege by Baal's demons. Catapults rain death just outside the town walls.

Baal himself travels up the sacred mountain, having left in charge here one of his most vicious generals, Shenk the Overseer. A ruthless taskmaster, he lashes his own minions into suicidal frenzies on the battlefield.

If you wish to prove yourself to us, destroy the monster, Shenk, that commands those infernal catapults outside Harrogath. If you manage to do this, return to me." 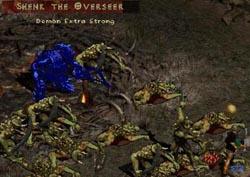 Shenk, overseeing.
There isn't any great strategy needed to kill Shenk, he's just a bigger, stronger Overseer. The first of his kind you see, but you'll see dozens more in the levels to come. He is surrounded by a few dozen minions, and he will lash several of them each time into an explosive rage, but with the ledges around him and the narrow stairs, you can take them on one or two at a time, or get to a corner and devastate them with any ranged attack. Sorceresses and Bowazons love the Bloody Foothills. Shenk has a decent amount of hit points, but doesn't hit that hard, so you shouldn't have too much trouble on any difficulty level if you can avoid the charging explosive minions.

Upon Shenk's death, dozens of catapult shots rain down on the area. This doesn't do anything in terms of damage to you, but it's colorful and fun to see, if it doesn't cause you incredible machine lag, especially if Shenk spawns with the multiple shots modifier (only applicable in Nightmare and Hell difficulty).

Reward: After Shenk is dead, when you next return to town Larzuk will offer to add a socket(s) to an item, and will discount his prices to you. The socketing quest is just like the imbue quest in Act One, you can wait and do it as much later as you want to, and it will remain an option when you click Larzuk until you use it.

The quest adds the maximum number of sockets possible to the item you choose to socket. You can only use this quest reward once on a given item.

If you're here to defeat Baal, you must prove it!
As we speak, Harrogath is under siege by Baal's demons. Catapults rain death just outside the town walls.
Baal himself travels up the sacred mountain, having left in charge here one of his most vicious generals, Shenk the Overseer. A ruthless taskmaster, he lashes his own minions into suicidal frenzies on the battlefield.
If you wish to prove yourself to us, destroy the monster, Shenk, that commands those infernal catapults outside Harrogath.
If you manage to do this, return to me.

You've proven your skill at rescuing fair maidens...but how are you at killing vicious beasts?

I believe that stopping the siege on Harrogath is the only way for you to earn the trust of these people.

Uh...Did I mention there were catapults?

Qual-Kehk and his men have been fighting to break the siege for some time. Where many have failed, you may succeed.

After so many have died, who are you to think you can accomplish what our proud warriors could not?

About to face Shenk the Overseer and stop the siege, are you? You should ask Malah to perform your last rites before you go, stranger.

Those demons have been out there since before your arrival. Can you do nothing to stop them?
Your task is a simple one, warrior. Find Shenk and destroy him.

I understand your reluctance, but now is the time to strike.

What's the matter, hero? Questioning your fortitude? I know we are.

This may not be very encouraging, but you have fared better than the others who passed through those gates.
In regards to Shenk the Overseer, remember: a general is nothing without his men.

What are you still doing here? I thought you were going off to die.
Go...Be quick about it.

So, you still live. You're either quick or a coward.

I was starting to wonder how long it would take you to stop those beasts.
Good job.

Those catapults were like nothing I have ever seen before. You have prevailed against Shenk, my friend, but Baal is still far ahead of you.

You're an even greater warrior than I expected...Sorry for underestimating you.
As a token of my appreciation, I will craft sockets into an item of your choosing, and from now on, you'll get the best price for all my wares.

Oh...At last, the siege is ended. You truly are an angel.
I thank you.

Ending the siege does not earn immediate respect, outsider.
Respect only comes with sacrifice -- something I'm sure you know nothing of.

So...You managed to stop the siege.
You are more powerful than I gave you credit for. You have rightfully earned my respect.