From Diablo Wiki
(Redirected from Tomb of Tal Rasha)
Jump to: navigation, search

Tal Rasha's Tomb is one of seven nondescript tombs in the Canyon of the Magi in Act II, housing Tal Rasha, who has been imprisoning Baal for centuries. 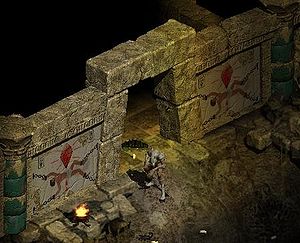 Entering the Chamber of Tal Rasha.

During the last great Sin War when the Horadrim were fighting Baal his Soulstone was shattered. The leader of the Horadrim, Tal Rasha, made a plan. Baal was imprisoned inside the biggest remaining shard, but since the stone couldn't fully contain him, Tal Rasha then imprisoned himself, tied against a stone sealed alive in Tal Rasha's Tomb, there to struggle with the demon for all of eternity.

In the game we are told that Tal Rasha's "great sacrifice" was actually in vain, and an act of great hubris since Tal Rasha was soon corrupted and Baal has been freed (we see Marius freeing him in the Act 2 Cinematics).

Illustrated in the infobox is the Chamber of Tal Rasha entrance to the tomb, near the end of Act II. Act Two. The tomb is opened by completing the Horadric Staff and then inserting it into the cone on the floor, which triggers the lightning you can see in the screenshot.

The screenshot to the left shows the chamber you get to when entering that crevice, and fight Duriel. It illustrates a tomb-painting in the interior, where wall art tells the story of what happened here.

Worth noting is that there are NO WAYPOINTS throughout the Tomb, so leave portals around when you travel downwards in order to get back if you need to retrieve your corpse. Otherwise, it's a long run from the Canyon of the Magi.

These character are, or have been, in Tal Rasha's Chamber rather than the top levels of the Tomb: