Were you looking for the Game article for Diablo I?

Diablo I was released in 1996 in North America and 1997 in Europe, it's the game the Diablo franchise is based upon.

The best way to learn about Diablo and Hellfire is the play the games. Both games are fun and easy to learn (Blizzard's trademark). If you are more familiar with Diablo II or Diablo III, you should find the D2 to D1 differences article very useful in easing your transition. We also recommend that you read the Diablo I Manual; if you don't have a hard copy click that link to read it online.

This wiki is designed to service players with some familiarity with the game, and does not include all of the most basic "how to" game info. It's assumed that you know how to operate the controls, create characters, engage in combat, etc. (And if you don't you'll learn those in the first hour of playtime, so what are you doing wasting time reading this for?)

What this Diablo I and Hellfire wiki does compile all of the intermediate and advanced information; especially stats and figures not found in the manual or even in the game itself. Here you'll find the stats for every monster, item and spell. There are also detailed character overviews with basic strategy for the Rogue, Warrior, and Sorcerer, as well as Hellfire's Monk, and the hidden characters, the Bard and Barbarian (with instructions on how to enable them). You can also learn about all of the quests and NPCs, details of the game plot and world mythology, and much more. Use the navigation boxes below each page, or head to the Diablo I category for a link to every page about this game.

The remainder of this introductory page covers various general game information topics that aren't covered (at least not in such detail) elsewhere in this wiki.

It's recommended that you make pretty patterns with the items you drop in town.

There is no town "stash" in Diablo I or Hellfire. The only items a character can keep from game to game are those you carry on your back or in your inventory. Furthermore, since most characters need to drink a constant supply of mana and/or health potions while fighting, you will need to largely (or entirely) empty out your inventory during each game, before picking up everything you wish to save at the end of a game.

Items, gold, potions, spellbooks, and everything else can be left on the ground in town, wherever you find convenient. There were some bugs in early versions of Diablo that caused items left in town to sometimes vanish, but those are fixed in later versions and in Hellfire. Just be sure you pick everything up before you exit the game. This includes exits caused by killing Diablo, since when he dies all players on level 16 will be frozen in place, before being dumped out of the game and back onto Battle.net, or else to the game creation menu if you're playing multiplayer offline.

Diablo and Hellfire characters can be created as single or multiplayer characters. This decision must be made at the time of character creation, and it can not be undone or changed later on. Aside from the obvious fact that you must make a multiplayer character to play with friends (over a LAN, TCP/IP, or Battle.net) there are a few major differences between SP and MP.

Character Save Files in Diablo I[edit] 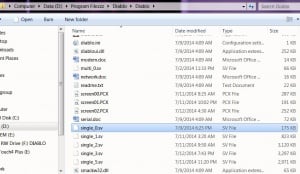 In Diablo I and Hellfire, all characters are saved locally, on your computer. This means the files can be backed up or restored manually, or accessed via trainers and editors. Players who play Diablo I via Battle.net are advised to save backup copies of their characters, since other players may have hacks that will ruin your character, corrupt them to make them unplayable, etc.

Character files are saved on your machine in two locations, depending on which version of Diablo I or Hellfire you are playing, and if your characters are single player or multiplayer.

All single player character files, and multiplayer files prior to patch v1.09 (the latest version), were saved in the folder where you have Diablo or Hellfire installed. The files are not the character names, but are generic titles:

These files are just the character and their gear in multiplayer, but are the entire game state in single player. More recently-created characters have the larger numbers and are displayed first in the listing. (If you wish to change the display order, just edit the files via Windows Explorer to change the numbers.)

Multiplayer files prior to patch 1.09 were hidden files stored in the Windows folder which were tied to the workgroup name of the computer. This was a problem for players who tried to copy their character to move them from one machine to another, since the exact same workgroup name had to exist for the game to "see" the files to load them.

Diablo I was not been supported by Blizzard after the release of Diablo 2, and thus many players found the game inoperable on newer versions of Windows or Mac OS, for a variety of reasons.

Many modern laptops do not have a CD-ROM drive, and thus can't install or play Diablo or Hellfire as these require the Diablo I CD to be in the drive at all times. (Players turn to pirated copies of the game to bypass this issue, or hacked "no-cd" versions. You can also use software like Daemon Tools to create a virtual disk that will run on a laptop without a CD drive.)

None of the tactics are supported by or endorse by Blizzard, but as the developers have not provided technical fixes for players who want to run the game on on modern computers, few players find ethical issues with these workarounds.

Technical issues are another matter, and many players are not able to make Diablo I work on a modern computer (Windows Vista was notoriously unfriendly) even if they have their original CD. Issues stem from older games like Diablo I running in DOS, only displaying with a 640x480 resolution, a 256 color palette, etc. This problem is largely fixed on the most recent versions of operating systems (post 2010), which seem to do better on emulation mode to run older software.

That said, many players are still unable to get older character files to read, or can't play multiplayer, or can't get Hellfire to install, etc. Unfortunately, it seems unlikely that Blizzard will address these technical issues so many years after Diablo I's release. If you run into technical problems, searching for help online will often find forum posts with useful info. Compiling a full set of work arounds is beyond the scope of this wiki.

The following table lists the requirements to join or create single or multiplayer games.

Most players eventually play only multiplayer Diablo I, simply because single player is too easy at higher levels. Multilayer monsters have double the hit points and other elements of the game are increased in difficulty as well. Furthermore, the shortcuts down to the Catacombs, Caves, and Hell are open as soon as a multiplayer character (of sufficient level) creates a new game, enabling players to zoom right to the challenging part, instead of forcing a player to work their way down through the Church, Cats, and Caves every new game. The trade off is that multiplayer D1 has only 4 quests, the same 4 in each game, and Pepin does not sell elixirs, making maxing out your attributes a much longer process.

One interesting feature in Diablo I that didn't make it into Diablo II is the kill counter. This little bonus feature keeps track of how many of each type of monster your character has killed in that game. This information is important, since at 15 kills the hover description reveals the resistances and immunities of that monster type, and at 30 kills the hit points are shown. Kill counters are tracked per game in multiplayer, and over the life of the character in single player, though there is a work around to keep them for longer than that in multiplayer.

One flaw in the programming of Diablo and Hellfire is the ability to "dupe" (duplicate) any item, in the game. This flaw exist in all game modes as well as on Battle.net, and merely requires a player to click on an item on the ground. The character will walk towards it, and if the player clicks on another item in their inventory or belt (such as a potion) at exactly the instant they pick up the item from the ground, a duplicate of the item on the ground will be created from the inventory item clicked on.

This can easily be done by accident, and players have turned useful items in their inventory into common items like a potion or a stack of gold, entirely by accident. In solo play, duping is used mostly to create spellbooks or elixirs, to enable characters to build up their power more quickly. It can also be used to create duplicates of high quality items, though only rings can be dual-wielded in Diablo 1. (Or one-handed weapons by the Bard in Hellfire.) Duped items can be given to other players, though.

Diablo 1 added some duping-prevention in patches, but only in the form of erasing duped items if more than one is dropped on the ground at a time.