Bunnies are found hopping around the surface areas of Act Five, and may sometimes be seen within the city walls as well, much like the chickens of Act One.

Unlike the chickens, but just like the large scarab beetles in Act Two, the bunnies can be squashed if walked over, though they are quick and somewhat difficult to step on. (Try walking, it's much easier to stomp objects in Diablo II at a slow walking speed, rather than running.) Amusing/gruesomely, this was apparently a huge debate within Blizzard North pre-release. Should the bunnies be "squishable" or not? 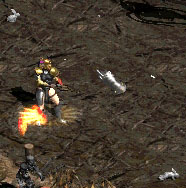 Like many minor features in a game under development, the squishable switch was flipped on and off numerous times, and whether they little white rabbits were untouchable or not tended to change depending on whichever employee was the last to fool around in the data files before a build was compiled.

Ultimately, the bunnies were made squishable, much to the delight of most everyone. Except for perhaps PETA.

A non-squished bunny can be seen prospering under the loving care of one of the Barbarian NPCs.