Difference between revisions of "Crafted Items"

Crafted Items are player-made items, created in the Horadric Cube and formed from a magical item and a few other recipe items such as gems or runes.

Crafted Items are named in orange, and have constructed names, like rare items. They have semi-random stats. Each is is tied directly to the recipe used to make it, and that recipe will always produce an item of that type, with stats from the same allowed mods. Staffmods, automods, affixes, sockets and/or etherealness on the item you use to make the crafted item are irrelevant and are erased when the mods for the crafted item are rolled.

Crafted Items are not all identical like Uniques, and they are not totally random, like Rares. Instead each Crafted Item recipe will always produce an item with from 1-4 preset modifiers, and 1-4 random modifiers. The preset mods are listed on our recipes page, but the random mods are just that, random. This is where luck comes in, as you might need to do the same recipe multiple times to get a good roll of random mods on top of the preset mods that will always be on that recipe.

Example (only valid in game version 1.07): There are two levels of the Blood Weapon. There are two of these, both require a ruby, a jewel, the item you want to craft, and a rune. Blood weapon #1 requires the Ort rune, which is pretty common, especially since you get one as a quest reward in Act Five. Blood Recipe #2 has slightly better preset mods, but it requires the Fal rune, which is #19, and found maybe 1/100th as often as Ort. 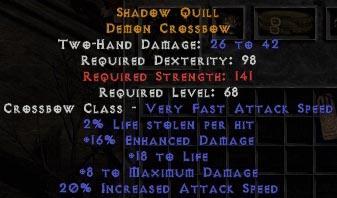 Every time you do the Blood Weapon #1 recipe, you'll get the weapon with:

So you could end up with a weapon that had 1% life leech, +10 life, +34% damage, and a couple of other junk mods, or you could get a weapon with 4% life leech, +67% damage, and up to four other top quality mods, including mods meant only to spawn on magic quality (blue) items. Bonuses stack as well, so a Blood Weapon could randomly add more life leech and/or more damage, making it truly impressive. The blood recipes are a little buggy, so sometimes you can get way more life leech than should be possible (30%+ has been reported) and sometimes you don't get life leech at all, but mana leech instead. (end 1.07 info)

Crafted items are treated like Rares by the game code, and will only get mods that can occur on Rares. They do not get magic-only mods (though there are very few of these post-v1.10).

One of the best aspects of Crafted Items are that their preset mods are often things that magical and rare items can never have, such as Deadly Strike, Open Wounds, Fire Absorb, Demon Heal, and many more. You can also get modifiers that aren't otherwise possible on a particular item type, life leech on Blood Boots, integer damage reduction on Safety Gloves, faster cast rate on Caster Belts, and many more.

So you are not just making Rares from expensive ingredients, you are making items with stats that you can never find otherwise, other than on some Unique and Set Items.

Check the recipe page for all recipes. Generally speaking, the recipes are a mixture of items, with usually something magical, a perfect gem, a jewel, and a rune. The Runes are always certain ones, not just any Rune, and the same Rune is used in many different recipes. Hel is very popular in making class-specific rings, for example.

You can put a crafted item into the socketing quest in Act Five and get 1 socket added only, same as Rare, Unique, and Set items.

Example (only valid in game version beta):During the beta Crafted items were allowing up to three sockets, but this was due to a bug and has been fixed.

A "Blood Weapon" recipe #2 with a Balrog Blade, the elite version of a Giant Sword. Recipe is +2-6% life leech, +20 Life, and +40-80% Increased Damage. This item is from the D2X beta, when the socketing quest was adding max sockets for the item type. The random mods on this one worked incredibly well, with bonus damage, bonus to demons, and even min and max damage added. The Shael rune adds IAS, and there are two sockets to go.

"Safety Weapon" recipe #1 with a Great Axe. This is another beta weapon, when the socketing quest would add more than one socket. So we have here the huge list of Preset and random mods on the Crafted Item, along with the results of Thul (3-9 Cold Damage, 3 sec Cold time) and Eld (175% Damage to Undead, +50 AR against Undead), along with a Perfect Skull, giving this just a ridiculous amount of mods. (end beta info)

Crafted items come in distinct types; Caster, Bloody, Safety, and Hitpower are a few common types, where there are many types of weapons, armor, and jewelry with similar properties. Any characters can make or use these.

There are specific weapon recipes, where only one particular weapon, like a Grim Wand or a Colossus Crossbow, will work with the exact required Runes and other ingredients. All of these weapons have very similar preset mods.

There are also class-items, which can only be made by a particular class. All Class item types have very similar stats for every character. See the recipe pages and you'll understand how they work.

You can use any quality of the ingredients unless otherwise stated. Some recipes require a specific Elite item, others require a rare item of exactly the correct type, while other recipes are more lenient and allow just about any item of the correct type. There are some weapon recipes that will allow any weapon in the entire game.

You must use a perfect one for all recipes that require a gem. Crafted recipes are basically semi-random imbues of the item you use in the recipe, so you want to get the biggest damage weapon or best Def armor, and Superior as well, if possible, since the superior is preserved on the item, unlike with Charsi Imbues.

All Crafted items can have from 1-4 random affixes. These mods will be the ones allowed on Rare items, not the bigger magic-only mods.

The maximum ilvl of affixes for random mods is determined by the Clvl of the character executing the recipe, by the following formula:

Crafted Items get one socket added by the socket an item quest reward.

You can get random affixes with the same bonuses as preset properties. For example if a weapon has +40-80% enhanced damage you could also get Merciless (+81-100% Damage) as a random affix and the damage would stack. You can get bigger damage with a crafted + kings + merciless + slaughter than you could possibly get on a Rare item alone.

When a magical/Rare/Crafted item is used in the recipe, the stats on it are erased when the crafted pre-set and random mods are applied. So don't use a Cruel weapon with 250% damage and expect the result to have that plus the presets and new random mods. Look at it like an Imbue of of the item, you only get the base item type, not any mods on the item.