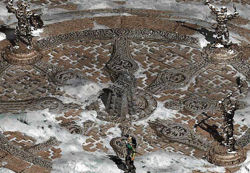 Click altar to speak.
The Ancients are three distinct NPCs, Korlic, Madawc, and Talic, who must be defeated in combat to complete the Rite of Passage quest in Act Five. Individually, they are listed as SuperUnique monsters. Besides fighting though, they speak with one voice, announcing their purpose as part of the Rite of Passage quest, and then giving the Eve of Destruction quest to characters who survive their trial.

The Ancients speak twice, in the middle of one quest and when they charge your character with the final quest of Act Five.

When a character clicks on the altar in the center of the dias atop the Arreat Plateau, the following speech is heard:

We are the spirits of the Nephalem, the Ancient Ones. We have been chosen to guard sacred Mount Arreat, wherein the Worldstone rests. Few are worthy to stand in its presence; fewer still can comprehend its true purpose.

Before you enter, you must defeat us.

The ancients give this quest to characters who defeat them in the Rite of Passage, after they return to their initial statuesque form.

You are a worthy hero! We augment your skill and grant you entry to the interior of Mount Arreat, wherein lies the Worldstone.

Beware. You will not be alone. Baal the Lord of Destruction is already inside.

The Archangel Tyrael has always been our benefactor, but even he cannot help us now. For Baal blocks Tyrael's spiritual presence from entering the chamber of the Worldstone. Only you, mortal, have the power to defeat Baal now.

Baal threatens the Worldstone -- and through it, the mortal realm, itself. You must stop him before he gains full control of the sacred stone. With it under his control, Baal could shatter the boundaries between this world and the Burning Hells, thus allowing the hordes of the Prime Evils to pour forth into the mortal realm like an unstoppable tide!

If you are weak, the world as you know it could be lost forever. You must NOT fail!

The giant Bul-Kathos (nephalem) Was a defending Mount Arreat from Uldyssian. "Mount Arreat will remain forbidden for you and all else who would desecrate its interior!".

Clad in kilt and sandals and with a golden band around his head, Bul-Kathos resembled some barbarian deity. "We swore that the way to the mount would be forever sealed from those like Esu".