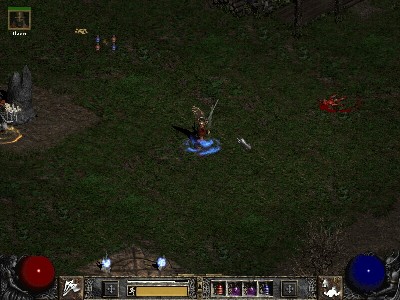 The most popular party skill in the entire game, virtually no Barbarian is satisfied with less than 20 base points in this skill. It works on the Barbarian and all friendly players and their minions, increasing everyone's maximum hit points, stamina, and mana by a percentage.

The warcry lasts for a good amount of time, longer with every skill point in it, and most Barbs max this one out quickly, and try to find bonus Warcries equipment to add even more to it. Dual "echoing" swords are a popular weapon switch item, for Barbs who really want to up their BO.

Post v1.09, this skill increases your current hit points as well as the max. Prior to v1.09, the skill only increased the maximum, so a character who had 800/1000 hit points would jump to say, 800/2000 hps, and look half dead. In those days it was necessary to drink a few potions, or leech to fill up the red bulb. This also created a danger if Battle Orders' duration expired, since a character would drop back down to their normal hit points, and then look half dead again when BO was recast.

Once you've played a Barbarian for a bit, you'll develop a timer in your head for how long since you last cast BO, and will learn to cast it again before then. BO lasts from 2.5-3 minutes at the level most Barbarians have in it. The mana cost is very low, so it's best to cast it any time you have a moment, even it's only been 30 seconds or so. It's possible to forget or not be able to stop for it during heated battles, and if you run out in the middle of a mob, it can be fatal. When there are multiple Barbarians in a party, the player with higher level BO should cast it for everyone, and keep track of the time so it does not expire.

It's always good to cast it before you go to town, so you'll ideally get back to the dungeon and recast to reset the duration before it runs out. It's always a good idea to refresh the BO before starting a big boss fight.

Most Barbs max out Battle Orders. It's a good idea to get it to at least Slvl 6 or 8 immediately, so you'll have enough duration on it that you aren't always running dry and having to leech full again.
Synergies: