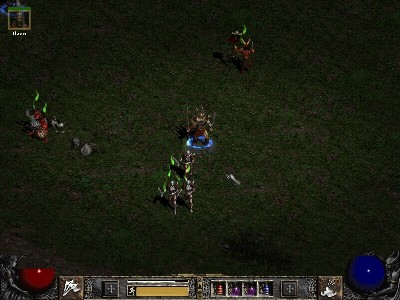 Monsters run away due to howl

"Frighten nearby monsters". Howling will cause affected monsters to cease attacking and retreat as a green 'rain' drizzles down on them. The effect of this skill is the same thing as "Hit Causes Monster to Flee" and the Necromancer's Terror curse, though the odds of it working are different.

Howl is most useful with a new character. Put a point into it and if you get swarmed in Act One send most of your attackers running off in terror.

This skill works by comparing your Clvl to the Mlvl of the monsters, factoring in the Slvl or the skill, and usually by late Normal this one becomes non-functional, when no monsters will run away at all. More points in the skill would help, but they are better spent elsewhere.

Monsters hit with this run in the opposite direction, and often very fast, faster than their normal movement rate. Monsters that are blocked from running will fight even with the green squiggles over their heads, so if you want to get away, cast it, run a step, and cast again. One Howl will cover most of the screen.

Howl does not work on other characters, Act Bosses, or most SuperUniques. One point is required as a pre-req for other more useful Warcries, and that's plenty.
Synergies: