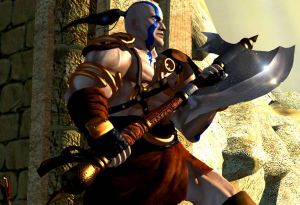 The Diablo II Barbarian is a master of melee and physical combat. Powerful in melee combat, the Barbarian boasts very high damage and hit points, natural abilities that raise his resistance and defense, and the ability to share powerful bonuses with his party members through the use of warcries.

In the game story, the Barbarian tribes are powerful, nomadic, and misunderstood. Previously seen as savages by most peoples, the Barbarians' culture has become known and respected, even as the Barbarians remain a people apart, living on the fringe of civilization and refusing the influence of those they see as soft and weak.

The Barbarian, a member of any of several tribes on the fringes of civilization, rebuffs the influence of those he sees as soft and weak.

Endless clan warfare and the constant struggle to survive in the hostile wilderness are reflected in the Barbarian's sturdy and powerful frame. Though perhaps lacking the sophistication of city-folk, the Barbarian has an acute awareness of his surroundings. Because of his shamanistic belief in the animal powers with whom he identifies, the Barbarian is sometimes associated with stories of lycanthropy. In fact, he believes he can call upon totemic animal spirits to infuse him with supernatural strengths and abilities, but these only work to improve his already superb battle-tactics.

The Barbarian is considered to be an improvement over the Warrior class available in Diablo I. The Barbarian's most innovative feature is the ability to wield two weapons at the same time. Allotting points to his 'Double Swing' skill in his Combat Actions tree will optimize this ability, enabling him to perform a quick attack with both weapons. Coupled with Skill Synergies, any Barbarian has the potential to become a potent fighter.

Being a melee specialist, a Barbarian should be mindful of his health and keep a plentiful stock of health potions. Luckily he possesses Find Potion and this will aid him in successfully harvesting a health potion from the body of a slain monster. At higher levels, if he charges into a situation he's not ready to handle he has a leap skill that will enable him to jump over the pack and into safety. From there he's more than capable of putting some distance between himself and his opponents as he has the highest amount of stamina out of any of the classes and can run for a good distance before needing to rest to replenish his stamina.

To enhance his Combat Skills the Barbarian has an entire tree dedicated to Combat Masteries. All are Clvl six and below and is the only section of any tree that does not have prerequisites. In other words, the first skill point you get can be used on any of the six masteries available. All masteries are passive and thus do not require activating, so as soon as a single point has been added he will begin to enjoy increased proficiency in that weapon.

Whereas the first couple of Acts present no problems for the Barbarian, defeating enemies becomes more difficult as the game progresses as he encounters more magic-oriented foes. He'll need to watch his resistances as he doesn't really specialize in long-ranged attacks so the chances of him being successfully hit by a spell-caster when going toe-to-toe is high. This problem is compounded by the fact that the Natural Resistance skill doesn't become available until he's reached Clvl 30.

The only long-ranged weapon skill the Barbarian possesses is Double Throw, with Throwing Mastery serving as the only way to enhance this. However, points can't be added to the former until he reaches a Clvl of 12.

Dual-wielding weapons presents another problem. Placing a weapon in the off-hand slot deprives the Barbarian of a shield which, consequently, leaves him more vulnerable to melee foes due to a lower AC. The warcry Shout may serve as a method to counter this.

There is a lot of variety in the Warcries tree, ranging from attack skills to aura-like bonuses to corpse skills. There are actually seven "Warcries" here; the other three are corpse skills grouped in here by default.

Warcries are cast just like spells are. When casting them the Barbarian throws his arms up and his head back and howls. The warcry is shown as a Nova of brightly-colored light moving out from the Barbarian in an expanding ring. All Warcries have a distinctive graphic, but the sound the Barbarian makes is random each time. The Warcries all have different ranges, with the beneficial aura-like ones generally going nearly full screen, while the attack Warcries that hurt monsters have much less range, usually just a few yards.

With beneficial Warcries, other characters and minions must be in range of the Warcry when it is cast. They'll then enjoy the benefit for the duration of the skill which depends on how many points the Barbarian has in it. Beneficial Warcries should be refreshed before they expire.

The three corpse skills are also very useful. Find Item is an invaluable skill for finding good equipment and Find Potion can also be helpful for the more patient Barbarian. Grim Ward works as a more constant version of another skill found in the same tree, Howl.

A good plan is to find two echoing weapons and use them on your weapon switch. "Echoing" is a prefix that gives +3 to all Warcries and two of these gives +6 to every skill in this tree. You switch weapons, cast Battle Orders and any others, then go back to your normal weapons. Dual Echoing is very useful for Find Item and Potion also, taking them instantly to Slvl 7 (or higher, with other equipment) which is good odds on both.

You can use +2 sounding weapons as well, but they aren't as effective. Any time you are in town, check the NPC for Echoing weapons, and buy anything with this bonus which you can dual-wield. Normal weapons are preferred due to their lower requirements.

One of the easiest ways to find two good such weapons is to check the shops offered in Harrogath and repeatedly enter the portal leading to Pindleskin as this resets the merchants' inventories.

Masteries increase the Barbarian's efficiency in the use of weapons such as swords, axes, polearms and even ranged attacks with Throwing Mastery. A Barbarian needs to pick one mastery (or possibly two if you go with Throwing) and stick with it, eventually putting the maximum 20 skill points into it. Bonuses from your Masteries add to your damage with every attack skill, so these should be maxed out first. If you are using mostly Whirlwind but with some Berserk, some Leap Attack, and some Frenzy, more points in your mastery will make all of those more effective.

Other than the six weapon masteries, there are four other passive skills in this tree, all of which deserve at least one point. Increased Stamina is helpful, though not mandatory. Increased Speed is the same, basically a luxury, but running faster means you get to each battle quicker, move faster in town, and can escape trouble more rapidly. Iron Skin is helpful for your defense and Natural Resistance is one of the most useful skills in the game.

All the Weapon Masteries give a % chance of hitting for double damage just like the Amazon's Critical Strike skill. This bonus is calculated after all other damage, including bonus from strength and skills, so it doubles the total damage, often a number in the thousands. This has always been the case, but the double damage bonus was not displayed in the skill description before D2X.

The Combat Skills tree houses the Barbarian's damage-oriented skills. In addition to single-hit skills, there are crowd control attacks that hit multiple targets and skills to increase attack speed. There is also one ranged-oriented skill in this tree in Double Throw. Lastly, the Barbarian possesses the skill Berserk, which is one of the few methods in which he can inflict magical damage.

All of these skills work well with the Barbarian's Masteries which add to his weapon damage when using any sort of attack. Warcries are helpful also in many cases.

It is said that when the world was very young the tribes of the Northern Steppes were given sacred charge. Somewhere deep within the great mountain Arreat, lies a source of great power, crucial to the well-being of all humanity. The tribes act as guardians of this artifact, and through this sacred duty, have shaped their way of life in observance of this power.

Steeped in mystery and tradition, these people refer to themselves as the Children of Bul-Kathos, the great and ancient king. To better protect their lands from outside forces they adopted a nomadic lifestyle, frequently moving within the confines fo the Steppes and maintaining few permanent settlements. Isolating themselves from the world outside their territories, they eschew the use of magic and complex machinery, as they believe these things can only weaken the resolve developed over so many years.

The Children of Bul-Kathos have developed a kinship with the land and have learned to harness the primal energies in nature to enhance their own substantial physical prowess. Because of this, and their freedom from the trappings of the outside world, the Western Kingdoms has historically referred to these tribes as barbarians, an epithet that belies the rich cultural and spiritual history these people possess. Although some trade with these curious folk, they do so only along the outmost borders of their lands. All intrusions into the territory surrounding Mount Arreat are forbidden, and warriors from the northern tribes are quick to thwart any incursions.

Every attempt at conquest has always been met with fierce and decisive resistance in an account of one skirmish, hordes of Barbarian tribesmen silently appeared where none had been but moments before. Their bodies painted in mysterious designs, the tribesmen descended on the invaders, howling as the charged like the fierce mountain winds. Fully half of the trespassing soldiers immediately dropped their weapons and fled, the remainder were set upon by the Northmen with a fervor that none of the battle-hardened invaders had ever witnessed. No quarter was asked and none was given, but in the end, when the outlanders sounded a full retreat, no chase was given either . . . at least none that could be observed.

It is interesting that recently, since news of Diablo's re-emergence has spread, a small number of Barbarian warriors has been seen roving the lands outside the Steppes, prepared for war and seeking information regarding the recent activities of the Prime Evils. 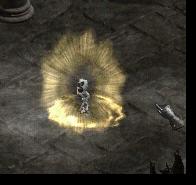 Renowned for their awesome combat prowess as well as their arrogant demeanor, the Barbarians appear to be perpetually ready for battle. Through harsh conditioning, the Barbarians excel in physical combat and tremendous feats of strength. They derive their power chiefly from intense physical training, but also tap primal energies from the living world around them. They can manifest these or add to their already considerable catalog of superhuman feats of strength and power.