ADVERTISEMENT
From Diablo Wiki
(Redirected from Lord of Destruction)
Jump to: navigation, search

Baal is a Demon, a SuperUnique, and an Act Boss.

Baal is the last monster in the game, and the act boss of Act Five. He must be defeated to complete the Eve of Destruction quest. Killing Baal enables a character to proceed to the next higher difficulty level, and gains that character a title as well. Killing Baal is also required before a (D2:LoD) character can open the portal to the Secret Cow Level on that difficulty level.

Baal can be discerned from his Vile Effigy duplicate by carefully observing the names. Note that in the hover name of real Baal, pictured in the image below, the "B" of Baal is slightly offset to the left from the "D" of Demon. The B and the D in the hover of the Vile Effigy are exactly aligned. You will also notice which is which since the Vile Effigy is spawned with just half of Baal's hit points, so even though their health bars look the same, the duplicate will appear to take damage much more quickly.

Baal has a fierce melee attack, and can also cast a wide variety of powerful spells:

You can read about Baal's background and lore in the Diablo 3 Wiki Baal entry. 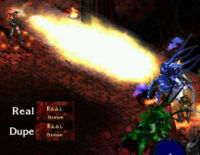 Baal above the Vile Effigy.

Baal's stats are all preset. He does not get any random Monster Modifiers.

Baal uses a variety of spells to supplement his melee strikes.

Like the other act bosses, Baal does not regenerates hit points.

Baal does not have any immunities on any difficulty level.

My brothers will not have died in vain!
Aaaaggghhh...
(Maniacal Laughter).