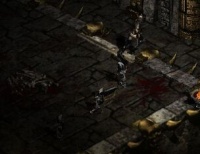 Three stabby fetish devils chase an assassin.
Among the most feared monsters in the game, Bone Fetish are a nightmare for melee characters, due to their explosive death animations. These deal a high % of the Bone Fetish's hit points as physical damage, making every Bone Fetish the equivalent of a Fire Enchanted boss (with purely physical damage). Their explosion damage is based on roughly 10% of their hit points, which may not sound like a lot, but do not be fooled (refer to hit points statistics in table below). And if that's not enough, their chance of deadly strike is also added to their explosion damage which doubles the damage (ouch). These little devils can be dealt with pretty easily one on one by any character with a reasonable amount of hit points, but killing several in a row is fatal for most melee fighters.

They're even more dangerous for spell casters or ranged attackers, who usually have lower hit points, so extreme caution must be used by Sorceresses, Bowazons, and others, to not kill a Bone Fetish at close range. Especially champions and bosses (with their higher hit points = higher death damage), and especially for any character who is cursed, since that enchantment will greatly increase the physical damage Bone Fetish deal upon death. Fortunately, the effect of deadly strike is not added if a character is cursed with amplify damage.

It's wisest to kill Bone Fetish from a distance, or to simply let mercs and minions do the chore, since non-characters do not take damage from their explosive deaths. Bone Fetish have low hit points and resistances, so they die fairly quickly; so quickly that characters need to be careful not to take them out while simply trying to stun or chill them, before retreating. Their footspeed is scary, and they can not be frozen on any difficulty level, and can't even be chilled in Hell.

Bone Fetish are feared chiefly for their explosive death, though they can deal considerable damage when alive, especially in large groups or when hitting characters with slow hit recovery speed who can not run away. Each individual Bone Fetish will seldom strike a target more than two or three times before pausing or running away, but these attacks come very quickly and usually prompt retaliation, which is what gets most characters killed.