Balrogs are Demons, and the weakest form of Megademons. 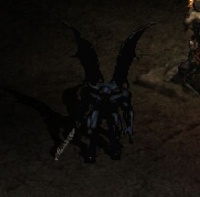 Note: The Balrog subtype is orange in color.
These creatures are fierce melee brawlers who fire an Inferno breath attack before engaging in melee. The inferno was very dangerous in early versions of Diablo II, but it has been nerfed in more recent patches, and is no longer a great threat to any character with reasonable fire resistance.

Balrogs are still quite dangerous with their melee attack, and they move quickly and hit hard. Their AI is unusual, and they tend to dance around a bit, circling their target before closing in. This makes them slower to engage than more direct melee fighters, but can make a mob of them more dangerous, since they will completely surround their target in short order, rather than stacking up as they all try to take the shortest route to the character.

The weakest Balrogs in Hell difficulty are found on Abaddon, while the strongest are found on the Infernal Pit.

Balrogs are melee attackers with the ability to use the Inferno spell from a distance. The Guest Monsters types add a % chance of fire damage adding to their melee hits.