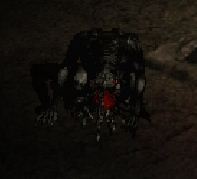 Corpse Spitters are Demons. They're a species of Regurgitators.

Regurgitators earn their name with an unusual AI. They will fight melee style, and quite effectively, but their first priority is to waddle around the battlefield, consuming whole the corpses of dead monsters. These they chew up for a moment, before spitting the partially-digested remains at the nearest character or minion. These corpses deal fairly minor physical damage and can be blocked like any other projectile, but they make up in gross what they fail in damage. Corpses so eaten are destroyed, and can not be used by any corpse skills, or resurrected by monster shaman.

One of the most amusing bugs in the history of Diablo II was in the first version after release; at that time Corpse Spitters could eat the corpses of dead mercs, and spit them just like any monster corpse. This was a problem since mercs so eaten were bugged, and could not be resurrected in any way, permanently losing all equipment on the merc.